Hydrogen’s place in an energy-efficient EU

The scale of Hydrogen production proposed, a massive 10 million tons per year by 2030, poses significant problems to the European Union’s climate ambition, energy security and consumer welfare. With the current energy crisis, reducing dependence on fossil gas, while avoiding negative impacts for end consumers is paramount. 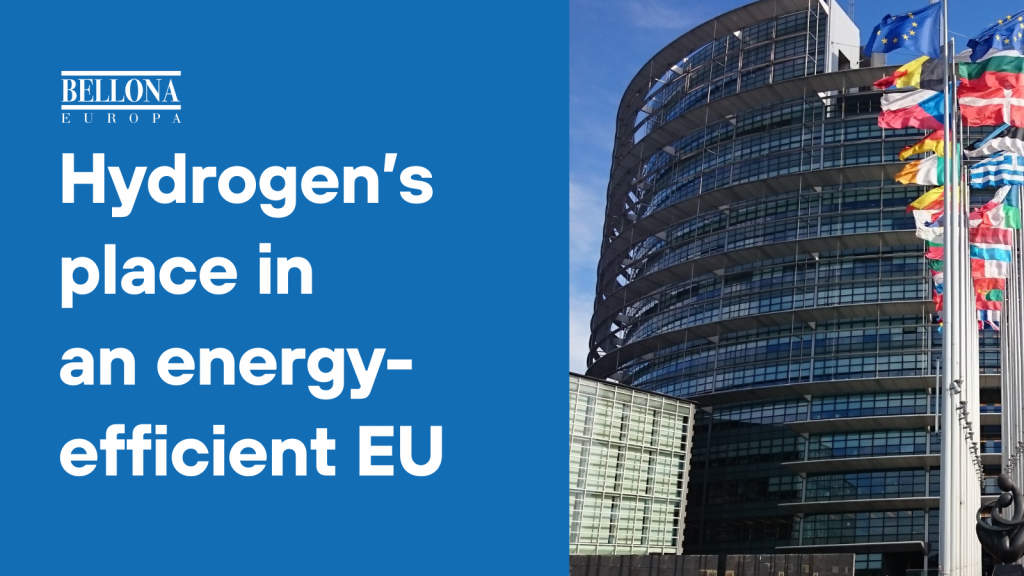 In this year’s State of the Union speech, European Commission’s President von der Leyen established that the heart of the Green Deal is Hydrogen and that to facilitate its rapid uptake, a Hydrogen bank would be set up, funnelling resources of up to 3 billion euros from the Innovation Fund. The scale of Hydrogen production proposed, a massive 10 million tons per year by 2030, poses significant problems to the European Union’s climate ambition, energy security and consumer welfare. With the current energy crisis, reducing dependence on fossil gas, while avoiding negative impacts for end consumers is paramount.

Scale of the hydrogen target

Electrolytic hydrogen production requires a large amount of energy, 1.6 times its output. This 40% loss in energy does not include the additional energy required to compress or transport hydrogen. The amount of electricity required to produce the targeted 10 million tonnes of hydrogen would be close to 500 TWh, or approximately the total electricity consumption of France in a year. Sourcing this electricity demand from renewables to ensure it is green hydrogen would mean using up nearly all of the 537 TWh of current EU solar and wind generation. 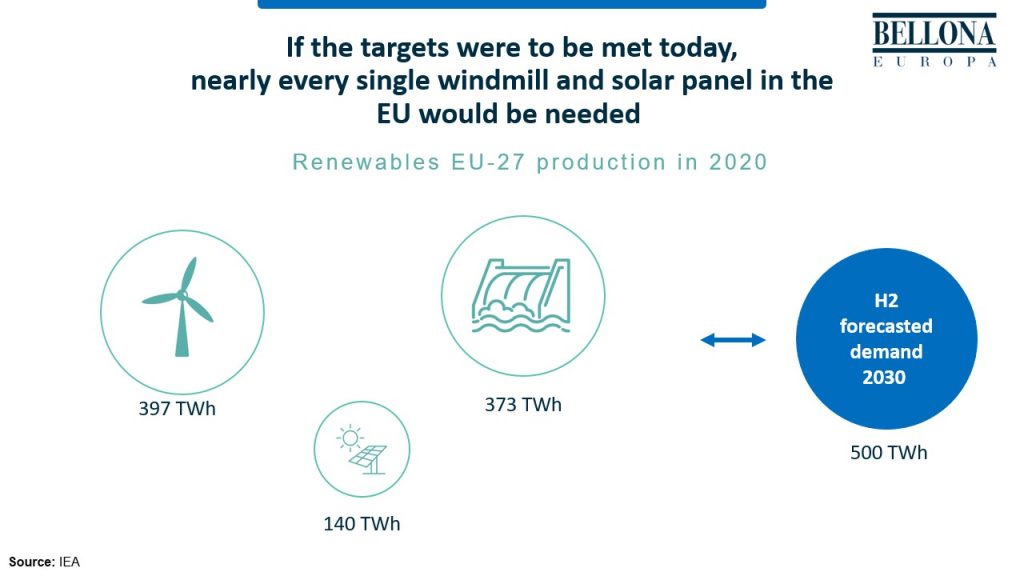 Considering that the hydrogen target is set for 2030, the ambitious RePowerEU plans would shrink to deliver roughly 900 TWh as compared to the initial 1400 TWh. Hydrogen takes a big bite out of the 2030 renewables production “pie”. 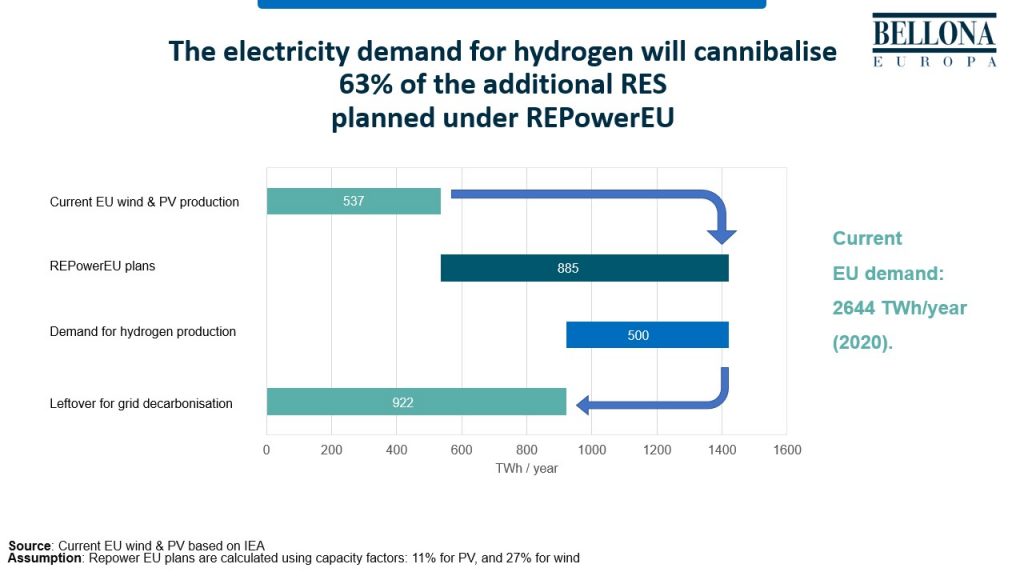 On a system level, hydrogen’s big bite means added electricity demand overall. Meeting these elevated demands would mean turning to sources of electricity production that can match the pace of uptake, which is often fossil gas. If all the additional electricity needed to produce the hydrogen target is sourced from gas, it will increase demand by 85 bcm or over half of the fossil gas imported from Russia in 2020. This would mean a significant increase in emissions, in fact, if the electricity is sourced from gas, additional emissions from hydrogen production would equal the current EU aviation sector emissions. 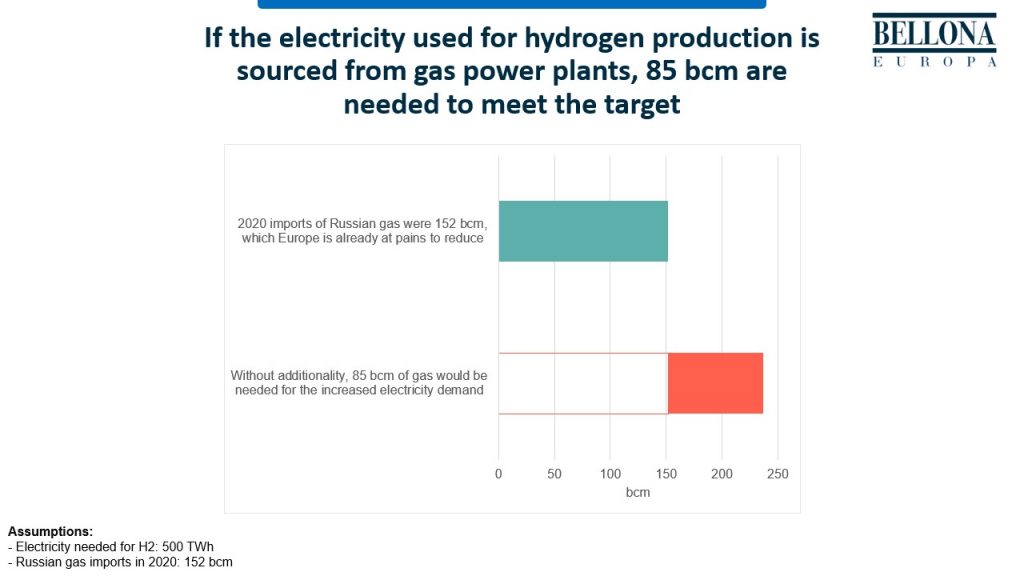 Using electricity in the most efficient way

Hydrogen is not an energy source: it is an inefficient energy carrier. Especially when electrolytic hydrogen is converted back into electricity, almost two third of the initial energy is lost. Most of the losses in the value chain occur when converting from electricity to hydrogen and back. 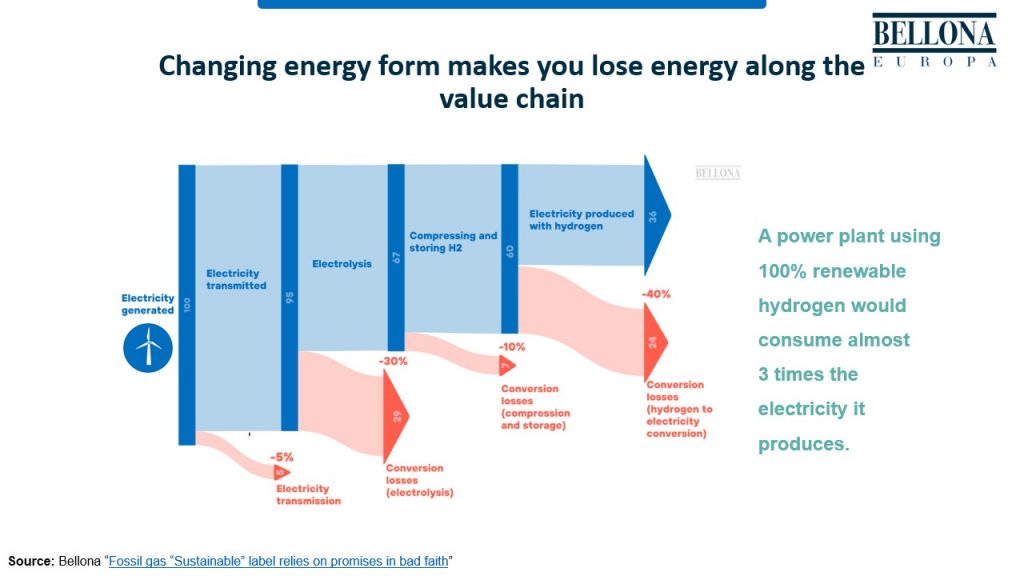 Beyond emission profiles, hydrogen throws into question the energy security of the EU through its inefficiencies. Alternatives to hydrogen provide far greater benefits to the EU’s energy security by displacing more bcm of gas per TWh. With renewables directly in the grid, nearly 2.4 times more bcm of gas are displaced per TWh than green hydrogen for electricity production.

End consumers will feel the burn

The EU has begun to take measures that help provide energy security through demand-side changes. Italy plans to roll out drastic cut downs of gas used for heating, German cities have begun to plunge into voluntary darkness by turning off public lights, and Switzerland’s environment minister even suggested showering together to save on gas demands. Consumer efforts to reduce demand will be in vain because of the European Commission’s poorly thought-out hydrogen plans that will blow up demand. This jeopardises allocating scarce renewables for efficient use and increases the gas needed to meet demand, moving further into the energy crisis.

Higher energy bills may persist or even further increase with aggressive hydrogen targets that do not prioritise an efficient use of scarce resources. Ten million tonnes of hydrogen would take up 57% of all planned additional renewable energy capacity set out by RePowerEU. The energy which could be used to power 69% of EU households instead.

Hydrogen’s role in the EU

Hydrogen’s role in decarbonisation works only under strict conditions. Limited by its inefficiency, delivering climate-credible solutions would mean ensuring additional renewables are deployed at the scale and pace to meet the electricity demands of hydrogen production and climate goals. This additionality provides climate benefits for the EU while ensuring energy security.

Hydrogen provides climate credible solutions by decarbonising high-emitting sectors where direct electrification is not possible. Targeted use of hydrogen, by reviewing alternatives on a case-by-case basis, results in an efficient EU energy system. There is a need to look beyond the hydrogen hype to realise more efficient forms of resource use. This means deploying direct electrification wherever possible.

The energy crisis throws into the spotlight the need for efficient use of scarce resources. Rapid deployment of hydrogen without additional renewable and accessing efficient alternatives often results in end consumers paying the price. To avoid consumers bearing a cost they did not sign up for, hydrogen must be one of several tools used in the EU’s energy transition rather than its heart.