Published on April 1, 2021 by Bellona Europa

European sales of fossil fuel vehicles took a massive hit last year, dropping by 5 million vehicles or more than a third compared to 2019. Meanwhile, electric vehicles appeared immune to the coronavirus as their sales more than doubled. EVs are gaining a foothold in Europe.

The success of electric vehicles (battery electric vehicles – EVs/BEVs) despite the pandemic goes to show that an increased availability of different models, improved technology and favourable framework conditions are altogether starting to convince consumers to make the switch to electromobility.

In 2020 Europeans reduced their spending overall due to the pandemic[1], and cars were no exception. EV sales, though, appeared unphased by COVID-19 as their sales increased by 107 %. The very same pandemic saw fossil fuel vehicle (internal combustion engine vehicle – ICEV) sales plummeting. 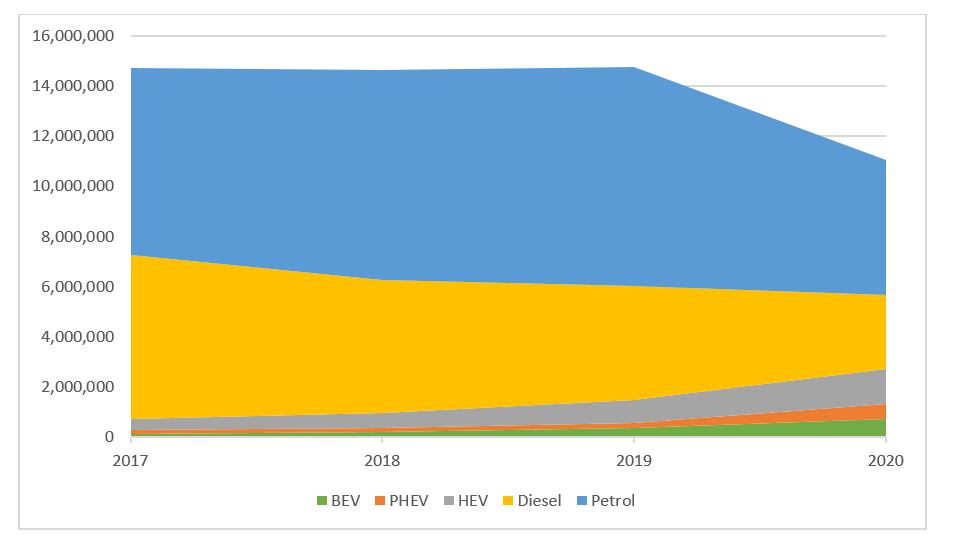 Looking at the data from most European markets[3], diesel vehicle registrations had been in decline for a few years already, partly due to Dieselgate and rigorous air pollution measures across Europe. In 2020 they continued their downward trend in new car registrations, albeit at an accelerated pace, ending up at just over 3 million units. That’s a decrease of 35 % compared to the almost 4.8 million units registered in the previous year.

Petrol vehicles had a similar decline at 37 % in the same markets; however new petrol car sales had been steadily rising prior to 2020, meaning the pandemic impact on petrol cars was even greater. New petrol car registrations ended up at just above 5.7 million, a reduction of 3.4 million from the almost 9.2 million new vehicles registered in 2019.

Overall, then, cars relying solely on combustion engines for propulsion lost more than 5 million sales last year, slashed by more than a third from the year before.

Turning our attention to pure electric vehicles (battery electric vehicles, BEVs), sales skyrocketed – at least relatively speaking. EV sales more than doubled in 2020, from 359,000 in 2019 to 745,000. A 107 % increase is a huge one, even though total sales volume is still not up there with petrol and diesel.

One might think that demand for EVs is more resilient to a pandemic because their buyers are more financially resilient, given the higher purchase price of an EV compared to a fossil fuel equivalent. Actually, the numbers suggest this is not the case. For new cars in general, demand dropped for both compact cars and large SUVs, by 24 and 6 percent respectively[4], meaning cars at both ends of the price range were negatively affected – albeit SUVs a tad less so. This in stark contrast to the aforementioned sales increase of EVs by 107 percent.

Moreover, due to falling production costs and EV-friendly incentive schemes across Europe, EVs are not that comparatively expensive anymore. The average price paid for a new car in the UK regardless of fuel type was £33,600[5] in 2018. The new average-sized “people’s EV” from Volkswagen, the ID.3, starts at £31,700[6]. And that’s just the purchase price – factoring in the total cost of ownership, even the most expensive ID.3 at £42,300 will likely outperform the average petrol car in terms of cost within a few years. Romania will give you a €10,000 grant to purchase an EV if you scrap a fossil fuel vehicle at the same time. In fact, 26 out of 27 EU countries plus the UK, Norway, Iceland and Switzerland all favour EVs in their taxation system, through grants and/or by other means[7].

In other words, economic inequalities between the average car buyer and the average EV buyer may only explain a small part of the discrepancy in new car registrations. At Bellona, we firmly believe that the numbers prove that car buyers have more faith in electric vehicle technology than conventional vehicle technology – the pandemic has just proved that EVs are future-proof. 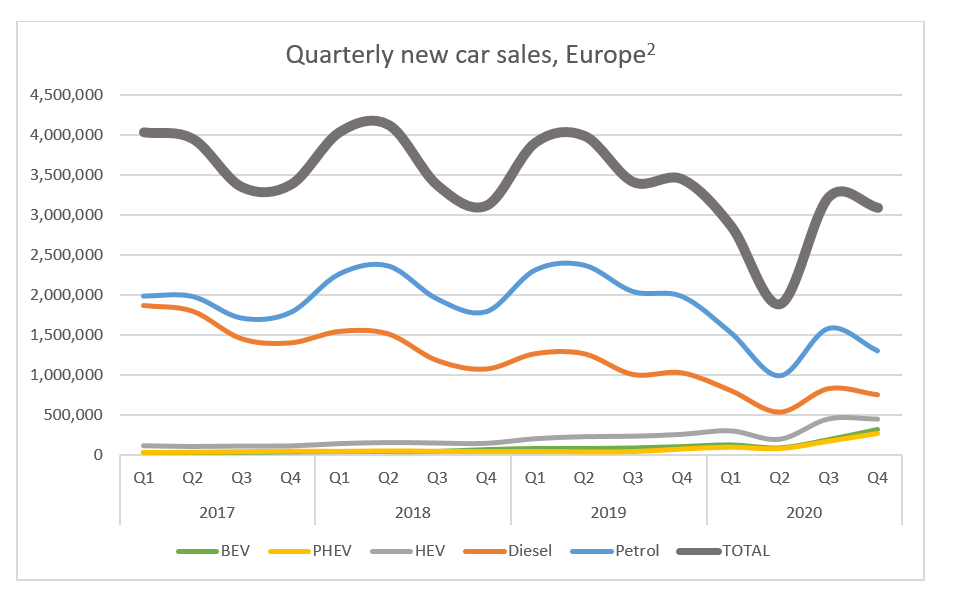 If we try to imagine what would have happened without the pandemic, by just following the trendlines, diesel would probably have continued its decline whilst petrol sales could still have been increasing. Actually, already by the third quarter of 2020 new car registrations had bounced back to near pre-pandemic levels, and from Q3 to Q4 total sales remained almost level whilst petrol decreased notably, and electric sales increased by 128,000 units quarter-on-quarter. This strengthens the hypothesis that EVs didn’t just experience a temporary pandemic boost.

The coordinated effort of the EU is pushing car manufacturers to convert their vehicle production to all electric in the long run. Only the future will show at what rate ICEV sales will decline and EV uptake will increase. However, we may be seeing the beginning of a pull-effect where consumers are transcending from early adopters to early majority. This is what made the EV boom happen in Norway, where pure electric vehicle sales now dominate the new car market. 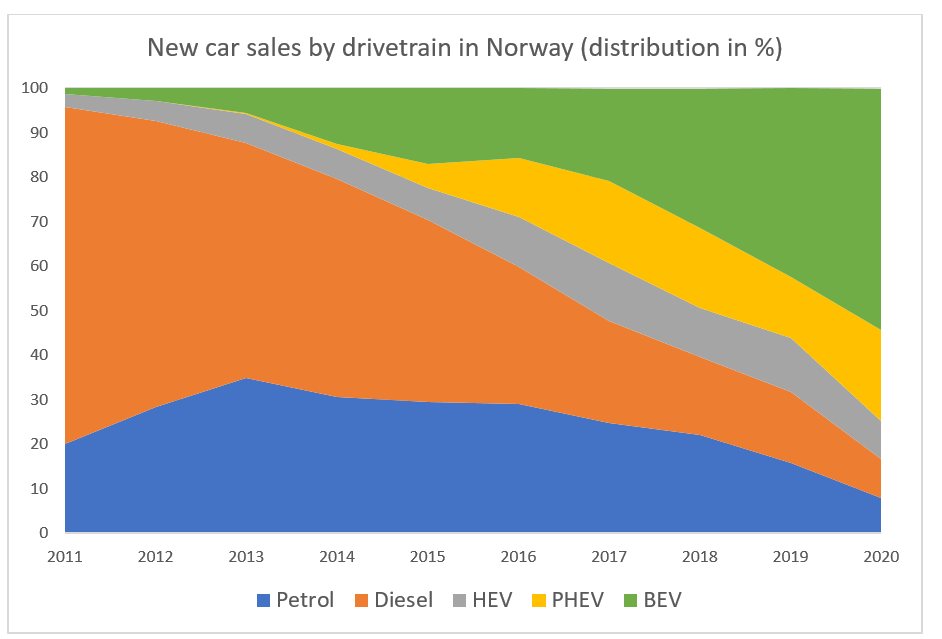 New car registrations by drivetrain in Europe now resemble the sales distribution in Norway around 2013-2014.