Published on October 22, 2014 by Bellona Europa 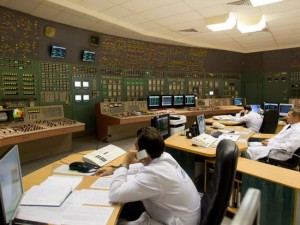 The 28 uncomfortable queries concerned the validity of data furnished by the utility on a proposed experimental power output boost on the VVER-1000 reactor to 104 percent capacity, safety criticisms voices by the International Atomic Energy Agency (IAEA), civil defense in the event of an accident, and other important questions for evaluating the project.

The roundtable discussion fell within the framework of public discussion of materials submitted for the justification of a license to conduct the experimental power boost at the power output of the Kalinin plant’s first reactor to 104 percent of is nominal use, which took place in the Tver Region town of Udomlya – the company town serving the plant.

Neither plant nor Rosenergoatom representatives, nor other experts even attempted to respond to the 28 questions posed by the Andrei Ozharovsky or Alexei Shchukin of the Environmental Rights Center (ERC) Bellona, even thought the queries were submitted in full compliance with the discussion’s established rules of order.

The roundtable discussion of boosting the power on the Kalinin NPPs No 1 reactor in Udomlya, October 17. (Photo: Andrey Ozharovsky/Bellona)

Despite this, the Kalinin nuclear plant’s information and public relations office released a statement on the roundtable saying that. “According to regulations, all participants were able to ask experts questions, which mainly affected the various aspects of safe operation, modernization and environmental activities of the Kalinin NPP. All questions received satisfactory answers.”

Ozharovksy and Shchukin have said the plant’s statement in no way corresponds to the reality of how the discussion was handled.

The Udomlya roundtable lasted more than four hours, and was attended by about two hundred people, the bulk of whom were employees of a nuclear power plant and its related companies. The notion of operating nuclear reactors beyond their design parameters has long been a subject of criticism from experts and environmentalists. The main difficulty is that the nuclear industry’s suggestion of increasing electricity generation is not forwarded with the hope of increasing energy efficiency or reducing reactor downtime, but rather to increase the reactors’ thermal power. This inevitably leads to heightened loads on the reactor vessel, steam generators, reactor coolant systems as well as a host of other safety elements of nuclear power plant design. These load spikes only increase the likelihood of severe radiological accidents, opponents of the experiment say.

Questions asked and not answered

One of the roundtable’s main objectives for the public discussion process was to inform participants about the planned experiment. One way to obtain such information as codified in the roundtable’s regulations and the announcements surrounding the event is to ask questions and have them answered. But some issues that were raised caused such discomfort for the event’s organizers that they preferred not to respond – namely to those posed by Ozharovsky and Shchukin

The official announcement of the hearing was published in the Kremlin’s official broadsheet mouthpiece, Rossiyskaya Gazeta, as well as on the Udomlya district’s official website (both in Russian). The announcement stated that those wishing to participate must apply in advance either “in person at the public information center of the Kalinin NPP, or by sending a request by email.” The announcement went on to invite the submission of questions within the application to attend, which is what Ozharovsky and Shchukin did.

“I think they have the right the idea by allowing participants the right to pose questions not only during the event but also in advance to the nuclear plant’s representatives so that they can prepare full, competent and accurate responses,” said Ozharovsky. “I took advantage of this opportunity, carefully examined the materials submitted for discussion and formulated 28 questions (in Russian) – none of them were read, none of them were answered. Perhaps the questions were unpleasant to those who initiated the experiment to boost the output of the old, dangerous reactor.”

Ozharovsky reported that during the roundtable, he asked Andrei Voitenko, the Kalinin stations information officer who was in charge of collecting the questions via email whether he had received them, and if not, if he should submit them anew. Ozharovsky said he had a hard copy of them in hand. Voitenko told him he’d received the questions and there was no need to submit them again.

“When the end of the roundtable was announced and I had not received answers to any of my questions, I approached Voitenko and asked for an explanation,” Ozharovsky said.

“He said the [roundtable] committee had decided not to respond to my questions during the discussion and that answers to them would be supplied later.”

Ozharovsky said, however, that the question submission regulations don’t provide for later responses to questions. He said that the roundtable question format provided only for answers to be given in public during the hearing.

“Thus, the roundtable’s organizers significantly violated their own rules,” he said. “Even if the answers to Bellona’s questions are eventually given, it won’t have happened in Udomlya, where participants had gathered to hear full information on the project.”

The negligence of the authors preparing the materials

One awkward question that was sidestepped read: “Why do many places in the Materials for the Substantiation of a License [for the power boosting experiment at reactor No 1] provide data on reactor No 2?”

Perhaps the authors just copied and pasted text from the Materials for the Substantiation of a License for the second unit and forgot to change a “2” to a “1.” This error speaks to their negligence and disorganization relative to important licensing documents.

Other questions left unanswered concerned a host of contradictions between data presented in various parts of the licensing documents. For instance, one table in the first volume of materials shows that the bulk of radionuclides that would be released into the atmosphere during the experiment are 99.9 percent inert radioactive gases and aerosols. One page later, however, a figure indicates that iodine-131 – not an inert radioactive gas – will be emitted. It’s unclear what’s true.

Another table in the first volume states that discharges of tritium in 2005 amounted to 25 terabecquerels during an acceptable reactor reset level of 20 terabecquerels. In the face of this contradiction, the text accompanying the text goes on to state that, “the content of radionuclides in the waste waters during the [reset] period does not exceed the permissible discharges approved for the Kalinin nuclear power plant.” Twenty-five is obviously more than 20. Which is correct?

Bellona’s question about the apples and oranges comparison to V-320s in assessing the environmental impact of design basis accidents in a V-338 is left unexplained. In 2000, the IAEA published a document entitled “Safety issues and their ranking for Small Series VVER-1000 nuclear power plants,” which listed and ranked issues with the safety of VVER-1000 small series reactors, to which category the Kalinin NPP’s first reactor belongs. The document detailed 85 safety issues with the reactor, and provided recommendations on how to address each and improve safety.

Bellona asked whether the Kalinin NPP had considered the IAEA recommendations while drafting the licensing materials for running the plant’s No 1 reactor at 104 percent power. Bellona further asked that, if so, how were each of the 85 safety issues resolved. It is, after all, a rare occasion that the IAEA expresses doubts about any nuclear reactor line, so when the agency to come up with 85 separate problems for a single type, it should be taken with more than a grain of salt.

The Materials for the Substantiation of a License mention nothing of these problems. To understand the current state of affairs with the power unit to undergo the experiment, it would be important to know how the Kalinin plant responded to comments from an international organization. This, however, was left unanswered by the roundtable.

Several issues relating to radioactive waste management are not at all addressed in the The Materials for the Substantiation of a License. Though they do several times mention the presence of temporary nuclear waste storage good for “the lifespan of the nuclear reactors” that is onsite at the Kalinin nuclear plant. Yet the materials also referred to intentions to extend the engineers lifespan of the plants reactors. Bellona posed the question of how many years of waste – 30, 45, 60 – the onsite waste storage is designed to hold, and what types of waste it is designed to hold. This query, too, went unanswered. The Kalinin nuclear plant on the skyline of Udomlya. (Photo: Englishrussia.com

The committee, however, remained mute on Bellona’s question about how much waste had already been removed from the plant and where it had been sent.

The Kaliningrad NPP also has a deep disposal facility that injects radionuclide containing waste into underground aquifers and cooling pools. The licensing materials don’t show any data on this.

Management and protection of the population

Questions about the tax rubles that will be spent on the power-boosting project were also evidently deemed too unseemly for public discussion, or any answers at all.

The licensing materials’ first volume offers a report on the implementation of a “modernization” program and the installation of “modern equipment” for the pilot power-boosting program. Bellona’s question about the cost of these modernization efforts and other work to bring the reactor up to snuff to run at an expanded capacity were met with a dull silence by the roundtable.

The most important questions are those about safety measures undertaken for the protection of the local population. The licensing materials first volume states that, “on the basis of the model action plan at the nuclear power plant, local authorities have developed strategies to protect the population of the Tver Region and neighboring areas, in the area of the Kaliningrad NPP, and Udomlya’s adjacent settlements, which are being effected by the plant as their general contractor.”

But the materials did not specify what adjacent regions – like possibly Novgorod or Moscow – had been beneficiaries of these protection and civil defense plans in the event of a radiological emergency at the power-boosted reactor. It also fails to state what protection plans will be put into effect for residents of Tver Region. Nor does it describe any evacuation plans or how much time it is assumed to take to evacuate populated centers like Udomlya, Vishny Volochek, Torzhok and Bologoye. Bellona asked, but no one would tell.

So, on October 17, participants of the Udomlya roundtable to discuss concerns surrounding running the Kalinin nuclear power plant’s No 1 reactor at excessive power didn’t get to hear any answers to 28 questions – or even the questions themselves – posed by Bellona’s Ozharovsky and Shchukin.

Bellona will again send the questions to the roundtables organizing committee requesting they be official bound to the meetings minutes, and request an explanation about why they weren’t answered.

This article was translated by Charles Digges.