The Sibir, the second in a line of powerful new icebreakers that Russia hopes will tame the Arctic, has set sail from St Petersburg to its home port of Murmansk on a nine-day course that will take it along the Scandinavian coast.

Published on January 14, 2022 by Anna Kireeva, translated by Charles Digges 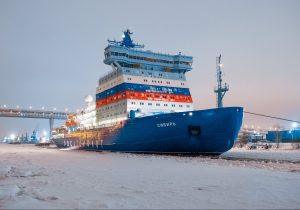 The Sibir, the second in a line of powerful new icebreakers that Russia hopes will tame the Arctic, has set sail from St Petersburg to its home port of Murmansk on a nine-day course that will take it along the Scandinavian coast.

The Sibir follows in the footsteps of the Arktika, the lead vessel of the new class, billed as the world’s largest nuclear icebreaker in the world. Both ships were built at St Petersburg’s Baltic Shipyard, where three other icebreakers in the class – the Ural, Yakutia and Chukotka – are currently under construction.

“The crew of the serial universal nuclear-powered icebreaker Sibir is staffed with experienced navigators who have worked and know the route well,” said Leonid Irlitsa, first deputy general girector and director for shipping at Atomflot, the Russian state nuclear icebreaker operator.

It might not all be smooth sailing. Bad weather is on the forecast for the North and Norwegian seas, which the Sibir will traverse early next week, with gale force winds expected in the region. In a statement, Atomflot said it will monitor circumstances and communicate with the vessel to navigate inclement conditions.

A few days after arriving in port on January 20, the Sibir will be sent on its first working voyage, taking it to the outlets of the Ob and Yenesei rivers in northern Siberia in the Kara Sea.

Andrei Zolotkov, who heads Bellona’s offices in Murmansk, the Sibir arrives after something of a delay – the vessel was initially scheduled for deliver back in 2019. But he said the delay did little to dampen shipping along the Northern Sea Route – the Europe to Asia waterway that’s the crown jewel of Russia’s Arctic development campaign – which ticked up by 5% last year with the help of Atomflot’s older nuclear icebreakers.

“With the availability of the Arktika and Sibir, the possibilities of escorting transport vessels in icy conditions will undoubtedly increase,” said Zolotkov. But he added that the arrival of the Sibir shouldn’t be cause for “a loud ovation,” given the mechanical issues that plagued the Arktika’s  delivery.

Like the Arktika, the Sibir’s displacement is 33,500 tons, and measures 173 meters from bow to stern. Its twin RITM-200 reactors deliver a combined 175 megawatts of power, making the Sibir and the Arktika the most powerful civilian vessels in the world. And like its sister vessels, the Sibir is named for an earlier nuclear icebreaker in a nod to Soviet heyday of polar exploration.

But the newer vessels will be facing newer tasks. Russian President Vladimir Putin has demanded that cargo tonnage flowing through the Arctic reach 80 million tons a year by 2024, a huge increase over present levels, in hopes of making the Northern Sea Route a competitor to the Suez Canal.

For that to succeed, nuclear icebreakers like the Arktika will be expected to keep the 6,000-kilometer passage running along Russia’s northern coast free of ice nearly year round.

That’s no small task. Even while the ravages of climate change are hitting the Arctic region harder than anywhere else in the planet, polar shipping lanes are ice-free only for about two to three months a year.

Late last year, many parts of the Arctic were hit by a deep freeze, making the Northern Sea Route nearly unnavigable for all but ships with the highest ice class ratings. The surprise cold snap left as many as 20 vessels ice-locked and requiring icebreaker rescues throughout the Eastern Siberian and Lapatev Seas, according to the Barents Observer.

The Sibir’s older namesake vessel was decommissioned 1993, after 15 years of operation that saw it become the first ship to enter the North Pole. In 2016, the original Sibir was dismantled at the Nerpa shipyard. Its reactor compartment is currently storage at Sayda Bay.