On December 8th, Bellona hosted its Carbon Capture and Storage (CCS) forum in Oslo with focus on the decarbonisation of European industry through the deployment of strategic CO2 transport and storage hubs, launching its new report Manufactoring the Future. Speakers representing Norwegian heavy industry, labour unions and key political party were invited to share their vision on how to reach the Paris Agreement goals. They shared their perspective on how to ensure the retention and creation of local and regional welfare-creating jobs through economic incentives and legislation.

Published on December 12, 2016 by Bellona Europa 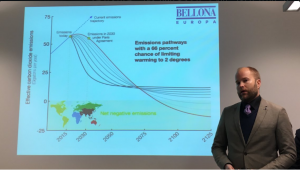 On December 8th, Bellona hosted its Carbon Capture and Storage (CCS) forum in Oslo with focus on the decarbonisation of European industry through the deployment of strategic CO2 transport and storage hubs, launching its new report Manufactoring the Future. The conclusions of the report are clear: Industrial CO2 Capture and Storage technologies provide a critical and cost-effective solution to decarbonising industry. This has become a central theme in the pursuit to retain global temperature rise below the 2°C threshold.

Speakers representing Norwegian heavy industry, labour unions and key political party were invited to share their vision on how to reach the Paris Agreement goals. They shared their perspective on how to ensure the retention and creation of local and regional welfare-creating jobs through economic incentives and legislation. At the same time, they highlighted that competitiveness in the post-financial crisis period must not be harmed. Presenters included Jonas Helseth, Director of Bellona Europa, Keith Whiriskey, Policy Manager Climate Technologies at Bellona Europa, Anne-Beth Skrede, Advisor at the Norwegian Trade Union Organisation LO, and Ole Løfsnæs, Director of Environment and Climate at the Federation of Norwegian Industries (Norsk industri).

Bellona has been calling for a strong coalition between industry, government, and labour unions in the effort to deeply decarbonise industry while preserving industrial growth and competitiveness. This approach, and critically also the way forward pointed to in the new Bellona report, were endorsed by all the speakers as well as three of Norway’s main political parties, who were also present at the event as panellists.

Opening the seminar, Bellona’s Helseth drew upon the conclusions of COP22 in Marrakech and COP21 in Paris last year, and the actions needed in Europe to realise the goals of the Paris Agreement. In order to achieve the Paris Agreement’s target, the emission of CO2 must not only be cut by 40% within 2030, and by 95% within 2050, but negative emissions will certainly be required as well. Pathways to realising this scenario include not only industrial Carbon Capture and Storage (CCS), but also CCS in combination with biomass feedstock (Bio-CCS).

In order to reach the objectives of the Paris Agreement, Industry must be deeply decarbonised using a variety of technologies, involving energy efficiency, renewable energy, and a decrease in demand. However, there is a gap between rhetoric and action in this effort. At COP22, Bellona’s representatives argued that Norway, the EU and the world at large must ensure rapid deployment of solutions that already exist. Essential to this effort is the deployment of CCS and Bio-CCS. The latter would allow for desperately needed negative emissions. Read more about Bellona’s activities in Marrakech.

With regards to developments in the European Union, Helseth pointed out that there are, in fact, countries that have developed ambitious and necessary national strategies to reach the Paris targets. The Netherlands, for instance, has recently published its energy agenda, which would allow for a low-emissions energy supply. In the document, the Dutch government commits to the realisation of the ROAD Project as an important first step towards a broader, large-scale CCS network. Such a network would consist of hubs and clusters needed to ensure sustainable growth in the Netherlands and Europe.

Whiriskey pointed out that a commercial CCS network includes three distinct parts: CO2 capture at industrial facilities, CO2 transportation, and CO2 storage. When discussing the current state of CCS deployment, the report clarifies that the interlinked dependence on any one of these parts and the counter-party risk that flows from this dependence is an obstacle to the development of the other parts. The core reason for the tension is there is currently no accessible cost-effective pathway for most CO2-intensive industries to deeply decarbonise.

Especially effective, Whiriskey pointed out, would be the development of regional cooperation in rolling out a strategic CCS network of hubs and clusters. In order for European industry to decarbonise, the region producing the most CO2 in Europe needs to be provided an exit route for its emissions: namely, the Ruhr region in Germany. CO2 captured here could be transported to the port of Rotterdam in the Netherlands, from whence it could be transported to permanent storage sites in the North Sea. Currently, three CCS projects are being progressed by the Norwegian government, and the government has recently committed to realising at least one full scale CCS plant by the end of 2022. Critically it also has committed to providing CO2 storage in the North Sea accessed by a pipeline from a new shipping terminal on the North Sea, that could receive CO2 not only from the three Norwegian projects but also projects anywhere accessible per ship, in Norway and far beyond.

Anne-Beth Skrede looked at the topic of industrial decarbonisation from the perspective of the Norwegian Trade Union Organisation LO. 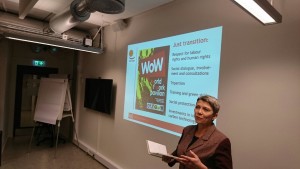 Skrede clarified that the Norwegian business sector and labour organisations consider three main points: 1) cuts in CO2 emissions must have a global effect; 2) national climate policies must ensure value and job creation; and 3) recognising the major possibilities for Norwegian business in a low-carbon society.

Enabling this transition will require placing employment and ensuring a just transition at the heart of climate policies and providing vocational training for the transition to low-carbon technologies. Norwegian research and development must be offensive, creative, and innovative. Collaboration between industry, government, and labour unions are key to realising a low-carbon transition which retains the welfare-base and creates jobs.

“Maybe we could make a living out of taking CO2 from Europe and storing it in the Norwegian continental shelf” said Anne-Beth Skrede.

Ole Løfsnæs reaffirmed Bellona’s call for industrial incentives to create the conditions to deeply decarbonise industry enough to reach the Paris climate goals. CCS and Bio-CCS are not optional in the effort to reduce CO2 emissions for a 2 or 1.5° scenario. For Norway, such technologies could provide some major economic benefits.

The vision to capitalise on the low-carbon transition is one shared by Bellona. Norwegian natural advantages, including the presence of geological storage sites and decades of offshore experience, enable Norwegian industry to benefit from this transition.

“Norway could become a host nation for the storage of CO2 in the future” said Ole Løfsnæs.

In addition to CCS, Løfsnæs elaborated on Bio-CCS, and its potential to reach the Paris climate targets while creating jobs. Access to capital and investments, through cooperation with the public sector, is the key for industry to ensure that industry will be able to contribute to the deployment of such technologies. 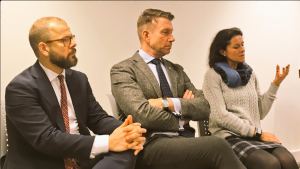 Terje Lien Aasland (Labour), Heikki Eidsvoll Holmås (socialist party SV), and Torild Aarbergsbotten (conservative government party Høyre) all expressed their agreement with Bellona on the pathway to a deeply decarbonised industrial sector. Bellona was very pleased and encouraged to see the main government party as well as two major opposition parties go on the record with such a strong commitment to the current plans for CCS deployment in Norway, all of them placing a strong emphasis on the shared transport and storage infrastructure and storage deployment as an enabler, very much in line with the approach taken in Bellona’s Manufacturing the Future report.

Bellona initially launched the report at a similar EU-level event in Brussels in October with representatives from labour unions, European industry and politics.

Presentations can be accessed below.