Published on October 14, 2016 by Bellona Europa 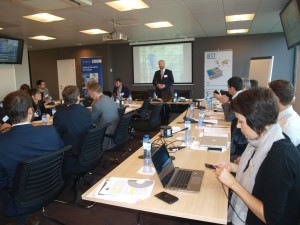 Bellona Europa was joined by European and regional policy makers, industry actors, trade unions and civil society, for a lively debate on the important role of heavy industry in attaining Europe’s climate goals. Current European climate policy, centered on the EU Emission Trading System (ETS), is in its current design inducing a growing contradiction between attaining climate targets and retaining Europe’s industrial production base. Europe’s industrial policies, on the other hand, appear to have been shaped largely in isolation from the climate policy. The risk is growing that this creates a situation with only losers, in which policy makers are presented with a disastrous false choice: climate ambition, or employment. Bellona’s event highlighted the key role of enabling CO2 infrastructure for a just transition to a low-carbon society.

With support from the European Climate Foundation (ECF), Bellona Europa hosted its report launch event ‘Manufacturing Our Future: Industries, European Regions and Climate Action’ on 13th October 2016 in Brussels during the European Week of Regions and Cities, which this year was suitably themed ‘regions and cities for a sustainable and inclusive growth’. 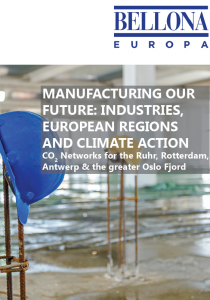 “Today there is common misconception, also reflected in EU policy, of growth and job retention being incompatible with climate action and sustainability. This urgently needs to change, and I believe yesterday’s discussion helped in stirring us in the right direction” comments Keith Whiriskey, Climate Technologies Manager at Bellona Europa and main author of the newly released report.

Eliminating the tension between EU climate and industrial policies

Limiting global temperature rise well below 2°C as agreed under the Paris Agreement will to a large extent depend on tackling emissions stemming from energy intensive industries which today account for one fifth of Europe’s total emissions. Because energy-intensive industries including steel, cement and chemicals are reaching theoretical efficiency limits, the application of CCUS technology currently constitutes the sole means to substantially reduce their emissions.

Notwithstanding, the EU target for industrial output is an increase to 20% of its GDP by 2020. This target appears to exist in complete isolation from EU climate targets (growing from 20 % greenhouse gas reductions by 2020 to 40% by 2030; 80-95 % by 2050). As long as infrastructure and an effective policy framework are not in place to enable industries to decarbonise deeply in accordance with climate targets, industrial employment is inevitably jeopardised.

When it comes to steel production for example, at present the EU hosts 500 production sites, split between 23 EU countries which provide 328 000 direct jobs. In Europe one tonne steel produced emits ~ 1.3 tonnes of CO2. Deployment of CCS will be crucial for retaining these jobs and achieving the EU’s industrial ambitions.

“The growing tension between climate targets and industrial employment is the absence of a realistic pathway for most CO2 intensive industries to deeply decarbonise while retaining production and jobs” explained Whiriskey during his presentation of Bellona’s report, “CO2 infrastructure and access to CO2 storage will play a crucial role in rectifying this tension”.

The fragmented nature of EU funding for CCS infrastructure and technology was also highlighted as a factor behind the failure in Europe to bring about real progress. Currently EU funding for CCS is administered by a number of different bodies, including the Commission’s Directorate Generals for Energy, Climate Action and Regional Policy.

“We need to think about ways of involving industry and regional actors in key strategic European industrial regions, including the industrial labour unions representing those in direct risk of job losses, in the shaping and coordination of these important funds” commented Jonas Helseth, Bellona Europa Director and co-author of the report. “Regional engagement is key to avoiding a disastrous situation, in which unions feel forced to take to the streets to protest EU climate ambition. In such a scenario, there are only losers”.

This was largely confirmed by the European Trade Union Confederation (ETUC), represented by Benjamin Denis who featured among the speakers of the event. Denis presented ETUC’s recent project involving seven strategic industrial EU regions, and called on Europe to urgently develop regional strategies for decarbonising industry. ETUC’s presentation highlighted the importance of creating an ecosystem which combines manufacturing activities, research & innovation, and social dialogue. By gathering key stakeholders from key industries, regions, policy makers and civil society, yesterday’s event proved useful in putting us on the right track and starting a constructive debate.

In recognition of Bellona’s decades-long efforts to lay the foundations for Norway to become a European leader in climate action, the Norwegian energy ministry represented by Kristin Myskja attended the event to present Norway’s plans to progress three industrial CCS projects, with a shared transport and storage solution that could also be accessed by emitters outside Norway, thus enabling solution-oriented conversations that are currently not taking place in Europe.

Key European industrial regions covered by the report, including Rotterdam and Antwerp, were represented as speakers, as were the European Commission DGs Energy and Growth respectively, as well as Acatech, the independent scientific organisation that currently works to revive the industrial CCS debate in Germany.

Last but not least, ArcelorMittal and HeidelbergCement, two major European industrial companies from the steel and cement sectors respectively, both gave interventions confirming the need for CO2 infrastructure and storage in order to deeply decarbonise their sectors.

Simultaneously with the Brussels event, Bellona President Frederic Hauge presented the Bellona Europa report in Oslo at the Global CCS Institute (GCCSI)’s members meeting for Europe, the Middle East and Africa. His presentation and report was exceptionally well received, including by Lord Nicholas Stern who gave the event summary.

The agenda, participants list, and presentations made during Bellona Europa’s Brussels event, as well as Frederic Hauge’s Oslo presentation can be accessed below: