Members of the European Parliament (MEPs) Sirpa Pietikainen, Paul Brannen and Jude Kirton-Darling this week hosted the first discussion on the emission performance standard (EPS) in Europe for years. Discussants acknowledged some important things. First, that coal will continue to play a role for some time. But second, that coal capacity in Europe and the United States will reach the end of its lifespan roughly within the next decade. And therefore third, an EPS is the most effective tool to allow this ageing coal capacity to retire and make space for cleaner energy.

Published on November 24, 2014 by Bellona Europa 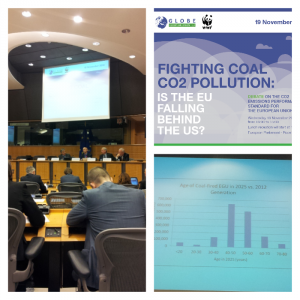 An EPS sets a maximum limit of CO2 emissions from fossil fired power plants. Depending on the level it is set at, an EPS effectively forces the highest polluters to either close or find ways to reduce their emissions. One way to do so is for instance to apply carbon capture and storage (CCS) to capture the CO2 emissions and store them underground.

Bellona Europa Director Jonas Helseth made Bellona’s expectations clear: “Bellona would like to see an EU EPS set at 225 kilograms of CO2 per MWh a fossil power plant produces. This would effectively outlaw all coal power and ineffective gas power, unless they apply CCS.”

An EPS is currently being introduced across the US, to be set at a level that bans all new coal fired power. And EPS is already operational in some US states, including California – the world’s 8th largest economy. California also has an effective anti-leakage policy: It will simply not import power that does not comply with its own EPS.

Two speakers from the US provided both insight on the US experience with EPS and thoughts on the European situation. One thing was made unambiguously clear by both: The US and European situations are not that different.

Almost half of US coal generation will be 50 years old or older by 2025. This is roughly the same age profile as in Europe. Over the last decade in the US, the average age of retired coal plants has been 52 years. Thus the switch to gas in the US is not only due to an increase in gas availability, it is also simply because coal power plants are getting too old to continue operating without costly upgrades.

Some, however, justify upgrades, maintenance and even new build of coal power by saying we need it as ‘back-up’ or ‘baseload’ power for when renewable sources cannot produce. Some countries are therefore providing so-called capacity payments to coal power producers, to guarantee them an income that is sufficient to stay alive when they would only produce power when solar and wind power are unavailable. This is nothing more than a subsidy to the power source we are in direst need of moving away from.

The US is showing that non-price mechanisms can be as effective as market based ones in driving the necessary changes to tackle climate change. In Europe, only the United Kingdom has an EPS. The discussion held in the Parliament therefore revolved around the experience of these countries and musings about applying an EPS at EU-level.

Jason Anderson of WWF (the organisers of this discussion) made it clear that the time is ripe for the EU to ‘wade into’ the topic of an EPS again. It has been kept on the backburner since discussions on the 2020 targets in 2008, and as the 2030 framework will be hashed out in the next year it is crucial that policy makers consider all options to strengthen EU climate action.

Bellona has worked closely with WWF, E3G and other environmental organisations to make the case for EPS in Europe. Read our joint letter to European policy makers here.

As MEP Brannen mentioned, as the public becomes ever more engaged in combating climate change, it is up to politicians to come up with and implement the tools to deal with the challenge and move forward – particularly regarding coal.