CCS experts from the European Commission, European Parliament and the UK’s Department for Energy and Climate Change where joined by key industrial actors to discuss the way forward for CO2 capture and storage in Europe (CCS). The Zero Emissions Platform (ZEP) hosted its annual general assembly in the European Parliament to focus on CCS in energy intensive industries and how to move forward with transport and storage infrastructure. Bellona President Frederic Hauge joined the panel to highlight the unique role CCS must play to ‘square the circle’ of climate action, industrial growth and energy security.

Published on November 12, 2014 by Bellona Europa 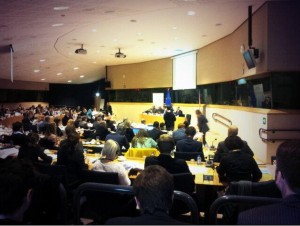 On Monday 10 November 2014 the European Commission’s technology platform for CCS, ZEP, hosted its annual event at the European Parliament. Experts in the field, from the heart of European policy making to key industrial players, gathered to discuss the developments of the last year and the way ahead. The focus of this year was on the role of CCS in energy intensive industries and on the key infrastructure that transports and stores CO2 after it has been captured.

CCS is key to Europe’s industry

The event was hosted by British Member of the European Parliament (MEP) Theresa Griffin with French MEP Edouard Martin. Both are members of the Socialist and Democrats group and both see a role for CCS in decarbonising and securing industry. As Martin emphasised in his closing remark, climate measures are not taken to ‘bother’ industry or threaten employment, but on the ground it can often feel that way.

Moreover, Koen Coppenholle of CEMBUREAU explained how CO2 emissions are integral to the production process of cement and other energy intensive industries, and therefore how energy efficiency measures can only go so far in reducing them. If we are to see the level of climate action we need, it must therefore be done in a way which is compatible with growth. As made clear by Phillip Pearson of ETUC, CCS in Europe’s core industries is the key.

Longstanding supporter of CCS and former President of the European Parliament, MEP Jerzy Buzek also joined the panel. Buzek underlined the unique role of CCS in decarbonisation, noting what is obvious but often forgotten: that CCS is not an energy-producing technology but a means to reduce CO2 emissions. Buzek therefore argued that any subsidies for CCS should be kept outside discussions about subsidising specific energy sources in the internal energy market.

Other panelists included Amy Clemitshaw, Deputy Director for Fossil Fuel Generation and CCS at the UK’s Department for Energy and Climate Change. The UK currently leads in Europe on CCS deployment and as Clemitshaw made clear, is no longer concerned with demonstrating CCS, but with commercialising it. Clemitshaw stated that the UK aims to make CCS cost-effective by 2020.

Transport and storage is linchpin for CCS deployment

With the opening of Boundary Dam in Canada last month, any remaining argument that full-scale CCS is unproven technology is futile. Both Canada and the United States consider CCS to be commercially available. It was therefore welcome to hear European Commission Director-General of DG Climate Action, Jos Delbeke, state that a CO2 emission free Europe will not happen without CCS. Delbeke drew attention to other countries’ realisation of this, including China, and said Europe now also needs to ‘get cracking’ on CCS.

Delbeke commended the inclusion of CCS in the EU’s 2030 Framework for Climate and Energy. ZEP Vice-Chair Gardiner Hill echoed Delbeke in underlining the importance of CCS being a part of the EU policy framework. Hill then presented the key findings of ZEP’s latest report on CO2 transport and storage.

As made clear by Bellona President Frederic Hauge, as he referenced Bellona’s latest report, storage is the linchpin of CCS deployment. This report finds that annual investments in the range of €500 million need to begin by 2020 if we are to deliver the storage capacity required by operating CCS projects in the 2030s.

Hauge underlined the need to approach climate change and CCS holistically, calling on all actors to quit ‘cherry picking’ technologies and approaches to combat climate change and deploy all necessary solutions. Hauge further lamented the Norwegian government’s efforts on CCS, which he said have so far amounted to little more than “spending money just to show how much money can be spent”.

Also in attendance was MEP Jude Kirton-Darling, host of an earlier CCS event on energy security, who posed a question about an Emission Performance Standard (EPS). An EPS is one of the many unused tools for Europe to strengthen its climate action. Bellona therefore welcomes Director-General Delbeke’s remarks that the European Commission is looking into making such a proposal. An EPS would effectively incentivise CCS on those fossil power plants which emit above the set limit.

As emphasised by Hauge, great things can be achieved when industry has clarity and predictability. As it stands, the EU’s Emission Trading System (ETS) does not provide this and thus it must not be made the ‘holy grail’ of EU climate policy. As long as we do not have an effective CO2 price in the EU ETS, nor any indication of meaningful reform (read Bellona’s brief on the proposed ETS reform), EU leaders must consider calls for an EPS, such as the joint letter of NGOs.

MEP Griffin closed the event by noting the growing sense of urgency to deliver CCS and made a call, to policy makers and to industry, to move this discussion on to action.