The climate report of hope

Two recent UN reports have established that we have a climate crisis. The third shows that there are solutions. Everyone should note the term ‘carbon negative’. It will be a vital weapon in the battle against climate change.

Published on April 7, 2014 by Bellona Europa 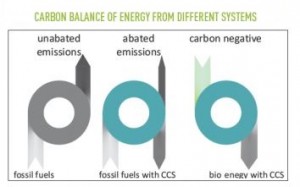 The IPCC is meeting this week in Berlin to complete its third interim report. Last fall they told of the overwhelming scope of the climate challenge, and recent weeks have seen many warning bells rung as the IPCC has described dramatic and costly adaptation measures.

This third report, which describes possible solutions, therefore becomes the report of hope: What is needed to prevent catastrophic climate change? International media, the IPCC and other climate scientists have now confirmed the working hypothesis Bellona has had since the last IPCC report in 2007: A massive expansion of renewable energy is imperative. As is energy efficiency. Unfortunately, this will not be enough. Carbon negative technologies will also be critical.

The IPCC draft report says the world must pursue more nuclear power or a massive deployment of CO2 Capture and Storage (CCS). This will come as a political bomb in Berlin: Germany has decided to phase out nuclear power, but has not wanted to invest in CCS either.

Bio-CCS is a key technology

CCS can be used for more than reducing fossil fuel combustion emissions: CCS is key to ensuring the stabilization of the climate – as the only technology capable of removing CO2 from the atmosphere on a large scale. It may sound like science fiction, but it is only a matter of using technology that already exists. Bellona has worked for many years with the combination of CCS and sustainable biomass, a combination which will lead to negative CO2 emissions. Biomass – wood, crops, seaweed, algae – absorbs CO2 from the atmosphere as it grows. The CO2 will be released again when the biomass is combusted to generate energy or other products. This provides a virtually CO2-neutral cycle. But if those emissions were instead captured and stored, for instance in depleted oil and gas fields, it would remove CO2 from the atmosphere over time. This is why we call Bio-CCS a carbon negative climate solution.

Half of EU power emissions and 200 times Norway’s emissions

Following the IPCC report from 2007 Bellona published “How to Combat Global Warming: The Bellona Scenario” and already then stressed the necessity of Bio-CCS. The report has since formed the basis of much of our work. From Bellona’s office in the EU-capital Brussels, we took the initiative in 2009 to establish a joint taskforce between the EU technology platforms for CCS (ZEP) and biofuels (EBTP). The goal was to bring together researchers and industry actors who worked with the two issues, but rarely spoke, to see how Bio-CCS can be done in practice. The Joint Task Force Bio-CCS presented its first report in 2012 in the European Parliament, with the European Commission and the International Energy Agency in attendance. It also saw a visit from the Midwest Geological Sequestration Consortium, which operates a Bio-CCS facility in the USA.

The report showed that Bio-CCS globally can remove up to 10 billion tonnes of CO2 from the atmosphere annually by 2050. This is nearly 200 times the annual emissions of major oil and gas exporter Norway. As a country which has earned its wealth from fossil fuel Norway has primary responsibility to contribute to the development of solutions like CCS. The Norwegian government needs to take responsibility and ensure that the cancelled CCS project at Mongstad is not all Norway that was able to contribute when the world needed it most.

In Europe, Bio-CCS could remove 800 million tonnes of CO2 annually by 2050. This represents more than half of the emissions from Europe’s power sector. Bio-CCS will also be important for energy-intensive industries, which have limited efficiency gain options to reduce emissions. If these industries are to survive and preserve their jobs, even thrive through the EU’s Industrial Renaissance push, CCS and Bio-CCS must be rolled out.

The Bio-CCS report also provides some recommendations for steps to make Bio-CCS a reality. First, regarding incentives, carbon negative emissions need to be rewarded in emission trading schemes like the EU ETS. Second, individual countries and the EU needs to step up commitments to CCS, both conventional and bio, and secure a fleet of large-scale projects. Third, research and development into sustainable bioenergy, be it biomass co-firing or advanced biofuels production, needs to be accelerated. Bellona opened the Sahara Forest Project in 2012 and is currently working on Ocean Forest. These are practical, integrated solutions that we need and hope to see more of.

To invest enormous sums in new nuclear power – which is both expensive and leaves us with radioactive waste issues still lacking solutions – does not appear to be a viable path. Finland’s experience with the Olkiluoto nuclear project is a warning: The original budget was €3 billion, but the current cost estimate is €8.5 billion.

The compass then points to CCS, which can and must make existing fossil energy more climate friendly. Bellona was the first environmental organization to put CCS on the agenda more than 20 years ago and has since worked on both technological and political tools to roll it out in Norway and in Europe.

The IPPC report will be a reality check not only for Germany but also for many of our friends in the environmental movement. Many have been negative to investing in CCS, calling it a subsidy for the fossil industry, which caused the climate problem to begin with. Many propose that all money be invested in renewable energy. While perhaps understandable idealism, creating such antagonism does not take the scope of the climate challenge seriously.

Director of Bellona Europa, Jonas Helseth is in Berlin for the occasion of the IPCC report, underlining the need for CCS and addressing Bio-CCS in particular. He can be reached at +32 (0)494 53 58 21 or jonas@bellona.org. Alternatively, contact Marika Andersen at +32 (0)475 80 74 83  or marika@bellona.org