The last two weeks have been marked by a high public profile for CO2 Capture & Storage (CCS) in several parts of Asia. Director of Bellona Europa Jonas Helseth participated as keynote speaker in two events, in Indonesia and South Korea and was uplifted to see CCS progressing in Asia.

Published on February 27, 2014 by Bellona Europa 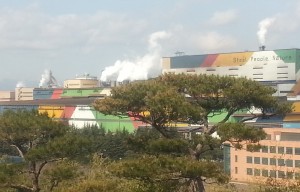 It started February 18-21 with a workshop on communicating CCS and the climate challenge to the public in the technology city Bandung of Western Java, Indonesia. The workshop, organised by Asian geology association CCOP, was originally supposed to take place in Yogyakarta on eastern Java. But the eruption of volcano Mt. Kelud on February 16 led to a last-minute change of host city.

“The fact that a workshop could be moved on such short notice with logistics remaining smooth is quite impressive”, said Helseth, who attended to present the Bellona Foundation’s work and experiences from Europe and beyond.

Bellona views CCS as a key technology needed to avert irreversible climate change, with global warming gaining momentum and causing increasingly irregular weather patterns. Such changes in the weather system are unpredictable, yet they often have devastating effects on food crops and other resources, and often more dramatic direct consequences for humans too.

Helseth gave three presentations in Bandung, sharing Bellona’s knowledge and experience on public communication on climate change and CCS. The presentations covered environment and health safety connected to CCS as well as Bio-CCS – the combination of biomass and CCS which can yield negative CO2 emissions, thereby removing excess CO2 from the atmosphere (read more here). The latter topic remains one of the main reasons for Bellona to promote a swift roll-out of CCS, as there are no other technologies available that can produce carbon-negative solutions on a large scale.

“The interest in Bellona’s experience with bringing together Europe’s research communities, industry stakeholders, policy makers and other NGOs in dialogue to create understanding and progress CCS was truly astonishing”, Helseth said, and continued:

“There were a great number of calls for Bellona to engage in Asia, coming from both public and private participants representing a highly diverse range of countries, including Korea, Japan, China, Thailand, the Philippines, Vietnam, Laos, Malaysia and Indonesia. What impressed me the most was the number of projects and initiatives on CCS underway in the region, including in the host country Indonesia, which now sports its own pilot facility. In that context, it’s also great to note that the UK government has committed support to Indonesia for development of CCS solutions to reduce the growing country’s rising CO2 emissions. The widespread activity and engagement is highly motivating for us given the current pessimism in the European CCS community, and I hope Bellona will be able to help support those initiatives. Progress in Asia can in turn help us get Europe back on the right track”, Helseth concluded.

As the EU CO2 price has dropped to record lows in recent years European investment in climate change mitigating technologies has reduced. Seeing the investment being made in Asia is therefore uplifting.

Helseth continued on from Singapore to attend the annual Korean CCS Conference at Jeju island as a keynote speaker. This year the event brought together around 500 participants from the region and beyond, including from Europe and the Americas. The conference lasted from February 24-27 and Helseth was invited to speak about his experience from leading the EU Zero Emission Platform (ZEP)’s Working Group (WG) on CCS in Energy-Intensive Industries.

Helseth provided a summary of the main conclusions and recommendations from the WG’s first report of July 2013, which were well received.

“It’s fantastic to get a chance to present our work to such a big and representative audience”, Helseth said, and continued: “not least when the Q&A session showed that people were truly listening and curious to learn more, and to engage in dialogue on the need climate action and investments. Climate awareness is certainly no longer limited to the West, if it ever was.”

Directly relevant to the topic of energy-intensive industries, Helseth ended his East Asia journey with a visit to the CO2 capture pilot at the Pohang steel factory on the Korean mainland.

“Reducing emissions from heavy industries, for most of which no renewable energy options are available, is a topic which we now see moving toward the top of the EU climate agenda. Until recently, process industry emissions have been largely ignored as focus has been on the power sector. We now see CCS in industry gaining ground”, Helseth pointed out.

“Not addressing this is not justifiable when one fourth of EU and global emissions are sourced from these industries. South Korea has with this pilot already placed itself in a global leadership role for moving toward sustainable steel production. There are realistic plans about up-scaling the pilot facility ten times in the coming years, moving toward industrial-scale maturity. And the fact that this happens at the world’s second largest steel mill with 35 million tonnes of CO2 emissions annually only underlines the project’s importance. I now hope the European Commission will take some real action to follow-up its Steel Action Plan from last summer, and put the EU back in climate technology leadership”, Helseth stated, alluding to the Commission’s DG Enterprise’s acknowledgment of the need to demonstrate and deploy CCS in the EU steel sector.

Helseth finished his presentation and visit with an open invitation to the relevant European Commission services:

“The Bellona Foundation and the ZEP Working Group on ‘CCS in Energy-Intensive Industries’ would be very pleased to now see DG Enterprise engaging in a dialogue on how to take its plan forward into real action, and indeed to see DG Climate Action and DG Energy including incentives for deployment for those industries in the EU’s CCS policies, following recent calls from the European Parliament to ensure such a development”.