Vis menyen
Bellona.org > Latest News > Carbon Capture and Storage > California dreams give it a starring role in the fight against climate change

Ninety eight percent of California’s gigantic energy sector may be CO2-free in 2050. “They can also take the rest of the United States with them in fight against climate change, but it will take time – and it will cost money, “said Carl Bauer at Bellona’s 25th anniversary conference today.

“California has impressive ambitions of energy efficiency, increased use of renewable resources and, not least, carbon capture and storage (CCS). But there are plenty of barriers, and those we need to tackle with the utmost seriousness,” said Bauer in his opening remarks before 300 hundred attendees at Bellona’s 25th anniversary conference in Oslo.

The backdrop for the introduction was not entirely encouraging: International climate negotiations have long been deadlocked, and last year greenhouse gas emissions increased more than ever before.

In this situation, many environmentalists hope that individual countries will step forward and pave the way towards a low-carbon future. Bauer says Califorinia is a light among these states as a large West Coast state with a climate policy that is far ahead of the national one.

“California is a rich and economically central state and the people there are environmentally conscious, “said Bauer, and pointed out that 14 percent of the state’s energy production comes from renewable sources.

Bauer is not just your avereage whoever in American environmental work, and definitely knows what he’s talking about: After many years in leadership positions in the country’s Department of Environment and Research, he is now chairman of a panel of experts who review opportunities and obstacles for CCS in California.

In his introductory remarks, he presented the main conclusions of the panel’s work: CCS is indisputably a good thing for society, and potentially a key climate solution. The obstacles are primarily centered on lowering costs, and that better regulations be formulated so that CCS can be put to use in earnest. 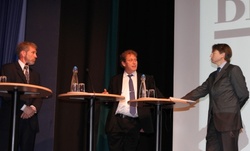 ‘Our calculations show that 39 percent of California’s electricity production in 2050 could come from coal and gas power plants with CCS,” he said. “If we add that the next 59 percent can come from renewable sources, we see that we can actually take the step into a truly low carbon society.”

Before Bauer finished his remarks, he had the following birthday greeting to the 25-year-old Bellona:

“I have worked with many organizations around the world, but there is something special about Bellona: Where many, unfortunately, just yell ‘no’ Bellona has said ‘how will we make the future better?’ I appreciate working with you!”

Environmental solutions are on the way

Before Bauer’s appearance, Bellona’s Paal Frisvold, the director of Bellona Europa, remarked on how Europe should best to combat climate change.

He believes that climate considerations coincide with the EU’s interests in the energy field.

“The EU can not continue with its current high energy imports. It causes large and unpredictable price swings, and makes Europe too dependent on Russia and other potentially unstable states,” said Frisvold.

“The solution is energy efficiency and renewable energy. Now that Europe also has big money to lose to dramatic climate change, a strong commitment to CCS in the industrial and energy sectors is required,” he said.

Frisvold has no doubt about the importance of getting the EU and the United States to take the lead in climate battle.

“The need that someone takes up the mantle of being the ‘early movers’ has never been greater. We must strengthen these two regions so that they can be the drivers of development,” said Frisvold.

Industry must be protected

How this is to come about was the theme when the Bauer and Frisvold later joined Bellona President Frederic Hauge in a panel discussion. 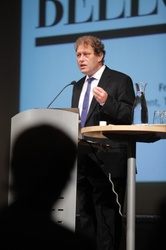 An often repeated objection to emissions cuts in rich, industrialized countries is so-called “carbon leakage” – meaning that climate regulation here is such that industries move out and establish themsevles in countries where emissions are far higher.

“This is a major challenge, but there are political solutions that are already being discussed: imposing an additional import duty on goods that are produced with high CO2 emissions and which can outperform cleaner domestic production,”said Hauge.

“If we are to get the United States and the European Union to go ahead without a binding international agreement on climate change, the industry must be protected. Such a carbon tariff will ensure this, and I think this could be an important climate solution,” he said.

‘We can not fail’

In his speech earlier in the morning opening the anniversary conference, Hauge spoke of looking to the future. Although Bellona turns 25 years old today, Hauge is far more interested in the 25 years to come.

“In 2050, my youngest son will actually be younger than I am today. With the alarming climate change scenarios we are now being served, I am concerned. But fortunately environmental solutions exist, and in the next decades they will be the industrialized and used on a large scale. To fail in the fight against climate change is simply not an option,” said Hauge.