Bellona’s 25th Anniversary Conference: IEA GHG’s Dixon: Thousands of tonnes of CO2 could be removed from the air with carbon-negative solutions

The potential for carbon-negative solutions is enormous, said a report presented on Thursday at Bellona’s 25th Anniversary Conference. As much as three gigatons of carbon dioxide could be removed from the Earth’s atmosphere – and the time for the promising technologies to be on politicians’ agenda is now. 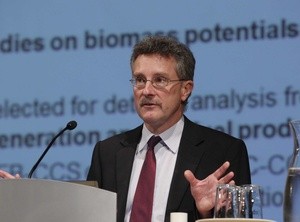 Carbon-negative solutions will play a crucial role in the fight against climate change in the coming years, said a new report presented at Bellona’s conference on Thursday.

The conference, entitled “The Future is Carbon Negative” and held on June 16 in Oslo, Norway, to mark 25 years of the foundation’s tireless environmental and climate work, has brought together prominent climate experts and policy-makers to discuss ways to combat the climate crisis.

Carbon-negative solutions – technologies that remove more carbon dioxide from the air than is released by the industry and energy production sites –can relieve the Earth’s atmosphere from as much as three gigatons of CO2 each year, or about 10 percent of today’s global annual CO2 emissions.

The report that highlights this potential behind the carbon-negative solutions was prepared by the Dutch renewable energy, climate, and energy efficiency consulting and research company Ecofys in cooperation with the International Energy Agency’s Greenhouse Gas R&D Programme (IEA GHG) and was presented at the conference by Tim Dixon, head of research and technology development at IEA GHG.

“Climate scenarios show that we will need these technologies,” Dixon said at the conference. “Carbon-negative solutions are significant and they need politicians’ attention.”

Carbon-negative solutions can provide a way for industries and economies to continue to generate the much-needed energy without emitting the enormous amounts of carbon dioxide that are produced as a result into the global atmosphere.

Plants and other biomass absorb CO2 as they grow. Removing the carbon dioxide accumulated in biomass when it is used to produce biofuels or electricity at a power station, and storing this CO2 safely in deep underground geological formations, makes it possible to achieve a carbon–negative balance: Emissions not only drop to zero, they fall below zero.

Thursday’s talk about a carbon-negative solutions was started off by Bellona Europe’s Tone Knudsen, who presided over the session “To Bio or Not to Bio: Growing Green and Prosperous.” 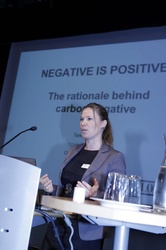 She noted that there are certain fields – such as agriculture and animal husbandry – where removing greenhouse gas emissions is indeed a very challenging task, whereas in other sectors, such as air transport, a period of several years may be needed before the fossil fuels used today are replaced by renewable sources of energy.

Therefore, because the urgency to reduce greenhouse gas emissions is so pressing – with at least 85 percent needed to be cut by 2050 – and because certain emission-heavy sectors yield better to emission-reduction solutions than others, some of these industries will have to find a way to remove more CO2 than is released into the atmosphere, Knudsen explained, thus reducing total carbon dioxide emissions as much as possible – hopefully, eliminating them completely. 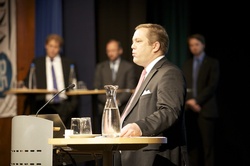 Bellona has worked with carbon-negative solutions for five years and has not been alone in placing its trust in the power of these technologies. Holland’s Ecofys and IEA GHG are just as dedicated to the goal of tapping into the potential behind these solutions – as are the people working in the now famous Sahara Forest Project.

One of the main challenges with carbon negative solutions is to provide enough sustainable biomass to make them work – and this is where the Sahara Forest Project comes in.

The project combines a variety of environmental technologies to produce clean energy, food and fresh water in desert areas by using salt water, CO2 and sunlight.

At the conference on Thursday, Sahara Forest Project’s managing director Kjetil Stake explained how using saltwater greenhouses in the desert can help grow large quantities of algae, which will be an important link in a carbon-negative technological chain.

On Thursday, the announcement also came that a pilot and demonstration centre will be established in a desert in Qatar as part of this ambitious project – where Bellona is one of the partners – to reveal the potential behind this revolutionary idea.

The Norwegian fertilizer-producing giant Yara and Qatar’s Qafco are Bellona’s partners in this endeavour and were presented to the conference participants today by Sahara Forest Project’s CEO Joakim Hauge.

Please see the press release about Yara and Qafco’s participation in the Sahara Forest Project here.