New report on the Tampen leakage

This week the Norwegian Petroleum Directorate (NPD) published a report a major leakage accident at the Tordis oil field in the Tampen area. The report indicates that the rock formation used by Statoil for injection of produced water was not appropriate, and that they should have consulted geologists at a much earlier stage. 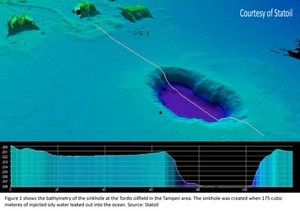 The leakage occurred on  May 14th 2008 when 175 cubic meters of oily water escaped from the intended underground storage site. The oily water was surplus production water injected as waste at approximately 1 km beneath the earth’s surface, but subsequently migrated upwards to the sea bottom. Seabed surveillance equipment detected a sinkhole (a depression on the sea floor) that was 30-40 meters wide and 7 meters deep (Figure 1). The sinkhole was located about 60 meters from the nearest oil production installation where the oil-contaminated water leaked out.

The injected water is production water from a sub-sea separation module at the field. Discharge of production water is one of the main pollution sources from regular operation, and is basically the oily excess water that is left after oil and gas are separated from the produced well fluid.

Statoil, who has been the operator of the field since 2003, was aiming to inject the water into the Utsira Formation. Recent bio-stratigraphic, strontium isotopic and litho-stratigraphic studies by the NPD proved that the rock unit that was injected does not belong to the Utsira Formation. The Utsira Formation is characterized as porous and permeable quartz sandstone. These characteristics make it suitable for storage of excess production water and CO2 as long as there is a sufficiently tight seal in place as well as absence of leaking faults.

According to the NPD reports, the rock unit that was injected is significantly younger than the Utsira Formation and has very different characteristics. As far back as 10 years ago, the NPD carried out studies showing hat the Utsira Formation is not a clean porous quartz sandstone in the Tordis area – something that would be favorable for safe injections – but instead a glauconitic condensed thin unit (as at Snorre and Visund North and Northeast of Tordis) or even alltogether absent. In light of these studies, NPD suggested that the leakage is not surprising (see Figure 2 for further explanations).

It is likely that only a limited volume of oily water was injected before increased pressure fractured the rock and the sealing claystone. Continued injection allowed the fracturing to reach the seabed and oily water escaped into the sea.

In 2007 a similar accident happened at the Visund oil field when an accumulation of sediments at the sea bottom was linked to an injection of cuttings and drilling mud.

Statoil has acknowledged that they should have brought geologists in at an earlier stage of the injection program.

The Utsira Formation is a leading candidate in the North Sea for CO2 storage.

Given comprehensive pre-studies and exploration drilling for suitable storage sites, with testing prior to injection and continuously monitoring of both the injection and the entire storage site, safe storage of CO2 in the Utsira Formation is one of many solutions to climate change mitigation.
“Statoil must be criticized for how they are operating the Tordis field, but that criticism must be confined to their petroleum activities, not CO2 storage,” says Aage Stangeland, a CCS expert with Bellona. The present day discharge of waster water from the sub-sea separation module goes into the sea.

Bellona also published an article in Norwegian on the accident February 2009.

“A biostratigraphic, strontium isotopic and lithostratigraphic study of the upper part of Hordaland Group and lower part of Nordland Group in well 34/7-2, 34/7-12 and 34/7-R- 1 H from the Tordis Field in the Tampen area (northern North Sea)”, 2009, Tor Eidvin, Norwegian Petroleum Directorate.