BRUSSELS – “Today, it is four years since the first ZEP General Assembly. It is two and a half years since March 2007 when the target for 10-12 CCS demonstration projects by 2015 was agreed. Yet, not a single confirmed announcement of a carbon capture and storage demonstration project has taken place. We need to work faster,” Chris Davies, British Member of European Parliament, told the ZEP General Assembly on October 20th.

Published on October 22, 2009 by Veronica Webster 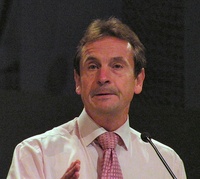 A speedier deployment of CO2 capture and storage (CCS) is required to curb CO2 emissions by 2015 so as to ensure that global temperature rises no more than 2°C, in accordance with recommendations by the Intergovernmental Panel on Climate Change (IPCC).

In view of this, MEP Davies called for the introduction of an Emission Performance Standard (EPS) to cap CO2 emissions from individual power plants.

“Further regulation is required at national or EU level. Directives are often badly implemented by Member States, who fail to meet targets. But amazingly, with the introduction of regulations, that don’t give any leeway to Member States’ interpretation, we see industry meeting required standards. Otherwise they’re out of business,” explained Davies.

However, according to Scott Brockett from the European Commission’s Environment Directorate-General, the Commission’s position holds that an EPS for the electricity sector would cause an inefficient allocation of resources within the sectors covered by the Emission Trading Scheme (ETS), which includes all large emitting sources, such as steel and cement plants in addition to thermal power plants.

In response, Frederic Hauge, Bellona’s President pointed to the current inadequacy of the EU regulatory system.

“At present, the price of CO2 fluctuates considerably over time and is too low. This creates regulatory uncertainty, as it does not allow industry to fully engage with long term planning nor feel confident enough to invest in CCS. Low CO2 prices also erode any economic incentive to invest in CCS. A mechanism such as EPS is needed. The(US) state of California shows how this can be done,” said Hauge.

In parallel, ZEP communications director Eric Drosin pointed out that there are other potential impediments to a speedy deployment of CCS. Drosin explained that in a recent survey in Germany, only 1 percent of those questioned were familiar with CCS. This highlights the need to promote an awareness and understanding that will allow civil society to make an informed judgement regarding CCS.

“In the 1970s we combated acid rain largely due to the high level of public support present at the time. A similar situation is possible and necessary for CCS,” said Staffan Tilander, Swedish ambassador for climate change.

From a broader and more long-term perspective, Frederic Hauge reminded the attendees that CCS must not be limited to coal plants.

“Combating climate change post-2020 is made impossible without the extension of CCS to other greenhouse gas emitters, such as natural gas, steel or cement,” explained Hauge.