NEW DELHI/OSLO – The world’s emissions of greenhouse gasses must be cut by 85 to 90 percent by 2050, widely respected German climate researcher Hans Joachim Schellnhuber said in remarks at the Delhi Sustainable Development Summit, adding the world has a one in five chance of evading a two degree Celsius rise in temperature if more ambitious goals are not met. 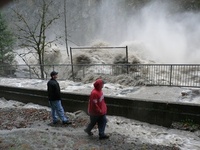 Schellnhuber is one of several climate researchers who have said that the United Nations Climate Panel has not gone far enough in its conclusions that 50 to 80 percent slash by 2050 is necessary to escape devastating consequences.

But even deeper cuts are going to be a hard political and economic sell, even to those countries that are gearing up to implement UN suggested cuts, as was suggested by the turbulent mood that prevailed at the end of the Delhi Sustainable Development Summit.

Yet Bellona, which was present at the conference hosted in New Delhi over the weekend, asserts that digging to reach the deeper cuts suggested by Schellnhuber and others is a life and death matter.

“To millions of people, even the common goal of limiting the average temperature increase to 2 degrees is nothing less than a complete catastrophe,” said Bellona’s Bjørn Utgård.

“Anyone who uses their petty economic self-interest to block a sufficiently ambitious agreement in Copenhagen will really have blood on their hands.”

When Schellnhuber talks, people listen
Schellnhuber – who also sits on the UN’s climate panel – was among the numerous highly placed state officials and researchers at the summit. He has also served as an advisor to both German Chancellor Angela Merkel and European Union Commission President Jose Manuel Barroso, so his assessments about upping emissions cuts will not fall on deaf ears.

Schellnhuber, along with many other climate researchers forwarded the notion that the UN Climate Panel’s previous prognoses had not been pessimistic enough. Schellnhuber said that Carbon Negative Technology that combines biomass like algae or trees with carbon capture and storage must be implemented as quickly as possible. Because CO2 emissions from biomass are a part of the earth’s natural cycle, sequestration of the gas will lead to actual elimination of CO2 from the atmosphere – hence the term Carbon Negative.

The UN Climate Panel’s 2007 report says that an emissions cut of 50 to 85 percent is necessary by 2050 to avoid a CO2 concentration in the atmosphere of more than 450 parts per million (ppm) – which would produce a 2 to 2.4 degree Celsius rise in temperature.

Schellnhuber’s comments are similar to those of  well-known American climate researcher James Hanson, who has also said in the past that the UN’s Climate Panel has not taken a tough enough approach. In Hanson’s estimation, the CO2 concentration in the atmosphere must weigh in below 350 ppm.

Adaptation
Jens Stoltenberg, Prime Minister of Norway, who boasted that his attendance-via-video-link was “carbon-neutral”, pointed out that those who have contributed the least to climate change will suffer the most. He went on to urge developed nations to lead the way by cutting emissions at home and financing mitigation and adaptation in developing countries.

He remained silent, however, about what he aims to do about making Norway’s exports, currently dominated by oil and natural gas, comply with a carbon-constrained world.

Bellona’s Jack Herheim took part in the Delhi Summit. He says there will be steadily more talk about how poor countries can adapt themselves to climate change.

“For many poor countries, climate change is no longer some far off hobgoblin, now it is a cruel reality, and many of these nations are now so taken up by how they will adapt themselves to more extreme weather than they are with emissions cuts,” said Herheim.

“This is not so strange in African nations as they are among those who will be hardest hit by climate change, while at the same time, the whole African continent represents 5 percent of the world’s total emissions. The United States for comparison is responsible for 25 percent of the world’s emissions, despite the fact that their population is a quarter of Africa’s,” he said.

Ethiopia’s president, Girma Wolde-Giorgis said that Africa’s low emissions rate has, in fact, hindered any consideration of the continent in world climate talks.

”We are not being listened to as much as India and China, because our capacity to pollute is very limited.”

Victims’ help and migration funds?
Anonte Tong, the president of Kirbati, a chain of islands northeast of Australia, urged in desperate pleas to the Summit an increased focus on the victims of global warming.

Like many other small island states, Kiribati is already experiencing severe damages due to climate change and have had to resettle people due to rising sea level.

“Allow us to migrate to your countries! If any of you have an island to sell, let us know – we are very interested,” said Tong to the Summit’s 800 participants.

“If we don’t go to Copenhagen with a sense of sacrifice, nothing will get done.”

Maumoon Abdul Gayoom, former president of the Republic of Maldives, an island chain in the Indian Ocean, left little question in his closing remarks about what Copenhagen must aim for.

“We need to agree on limiting global concentrations (of CO2) to 350 ppm and a maximum increase of 1,5 degrees,” he said – in other words, bang on Schellnhuber and Hanson’s target.

Fear and loathing of Copenhagen
December will mark the meeting of world leaders in Copenhagen, where they will grapple to come to a new international climate agreement to replace the Kyoto Protocol, which expires in 2012. Herheim said that more and more are losing hope that world leaders will reach agreement on a binding agreement to reduce climate gasses.

”Most countries are more afraid of Copenhagen than they are of climate change,” said Brice Lalonde, a former French environmental minister.

“The world needs leadership now, and the United States, the EU, India and China must take the lead.”

India’s minister of external affairs, Shri Pranab Mukherjee, viewed the climate negotiations as “a unique opportunity to work together.”

He urged the world’s nation to meet in Copenhagen with “a spirit of cooperation”, and to remember the words of Mahatma Gandhi:  “The earth, the air, the land and the water, are not an inheritance from our forefathers, but a loan from our children.  So we have to hand over to them at least as it was handed over to us.”