MURMANSK – The fourth international conference on oil and gas on the Russian Arctic Shelf took place Tuesday under the aegis of developing the Shtokman field under the Barents Sea, and focused on the environmental dangers of the colossal oil- and gas-drilling project.

Published on November 18, 2008 by Anna Kireeva, translated by Charles Digges 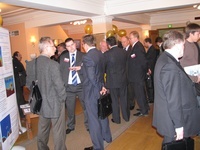 The three-day conference attracted the participation of scientists, environmentalists, oil and gas industry representatives and other specialists, who all convened to discuss the practical questions of developing the Shtokman field, the Arctic Shelf, and the environmental safety of work in the Barents Sea.

Some 500 participants from Russian, France, Norway, Sweden, Finland and other countries were acquainted with the available research on working on the Arctic Shelf.

In opening the conference, Murmansk Regional Governor Yury Yevdokimov remarked that of Russia relies on fossil fuels for 84 percent of its energy.

“The era of cheap energy has passed and the demand for it has increased,” said Yevdokimov.

In recent years, only Russia’s Northwest and Sakhalin regions have been able to increase oil recovery. Since 2007, Northwest Russia has become a the leader as Sakhalin recovery has started to drop off.

Now the Russian Arctic has become a subject of more thorough attention. According to specialists, it is estimated that some 63 percent of Russia’s petroleum resources are located under the Arctic Shelf. These specialists said that the oil content of the shelf is extremely high, but their degree of exploration is very low.

Conference participants came to the conclusion that exploration of the shelf must be a priority, which must be fortified on a legislative level.

In coming years, the oil and gas complex in Russia will be faced with developing the richest deposits around he Yamal Peninsula and the equally rich deposits of the Arctic Shelf. The pioneering project in developing the shelf will be the development of the Shtokman field.

Sergei Leus, the Murmansk Region’s transport, energy and industry minister, the key to developing the Arctic is the development of the Northern Sea Passage.

“Murmansk is the beginning point of this passage,” said Leus. “In connection with this, the Murmansk region must play a strategic role in developing the resources of the Arctic’s western sector.”

Developing the Arctic is a cooperative effort
Participants in the conference could not escape discussing the long burning question of territorial claims on the Arctic.

“Russia will not cede its own,” Yevdokimov said resolutely while underscoring that Russian and other countries bordering the Arctic’s desire to develop the Arctic are legitimate.

Yevdokimov said that the most pressing task is to make the Arctic not an area of competing interests, but a place for cooperation, as new technologies for extraction and transport of oil and gas in its challenging climactic conditions  is costly business that cannot lie on the shoulders of one country alone.

The Shtokman project
The project to develop the Shtokman gas condensate field was the common thread that ran throughout the three day conference.

“Shtokman is the locomotive for future projects, “ said Bengt Lee Hansen, president of the Russian division of Norway’s StatoilHydro, one of the three companies – along with France’s Total and Russian state gas giant Gazprom that comprise the Shtokman Development company. “Having realized this project, it will be possible with assurance to take on more projects on the Artic Shelf.”

“A number of orders in connection with the project are already being implemented,” he said, referring to the preparation of two partially submergible drilling platforms for developing the field, as well as conducting gas reconnaissance work in (the village of Teriberka, where a gas condensate plant will be built.

Conference participants were in agreement over the fact that the Russian Shelf is virgin territory demanding the creation of oil and gas field works whose operation requires the use of the latest science and technology, as well as provisions for industrial, environmental, and worker safety.

It is precisely these conditions that pose fundamental problems for developing the field. The fundamental difficulties are connected to the ice conditions in the Arctic, and the 650-kilometre distance of the field from shore.

As such, Gazprom representatives complained that there are not even accurate weather predictions for the region the field is located in. It is still impossible to grasp how helicopters will get to the field or how possible spills or other emergencies will be dealt with.

Clean technology for the Arctic Shelf
During the conference, Bellona presented its report entitled “Capture and Geological Storage of Carbon Dioxide as a Means to Solving the Problem of Climate Change.”

AT current, the majority of the world’s energy production takes place with the use of non-renewable sources, primarily oil, gas and coal.

However, in order to fight climate change, it is necessary to shift to renewable energy sources. This is costly and will take time, which is in short supply – the world must reduce its output of CO2 by 50 to 85 percent by 2050.

The goal of capturing CO2 is for the creation of a concentrated stream of highly pressurized carbon dioxide gas. Existing technology makes it possible to capture 85 to 95 percent of CO2 flowing though absorption devices.

After this, carbon dioxide gas can be easily transported to storage in drill holes, pipelines and railroad cistern.

It has been suggested that carbon dioxide can be stored in oil and gas reservoirs, which is a practice that has been studied and is considered safe for the storage of the greenhouse gas. Such reservoirs have held gas, oil and some CO2 for millions of years without leakage. CO2 pumped into oil and gas fields at a depth of more than 800 metres is covered by rock layers and cannot escape into the atmosphere.