BRUSSELS – In a drastic departure from its traditionally hands-off stance on nuclear energy, the EurpeanCommission (EC) is beginning to speak out publicly in favour of nuclear power as a viable low-carbon source of energy, signalling a worrying development for environmenalists who had banked on Europe as a proving ground for clean renwables. 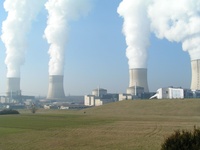 Matthias Ruete, Director General of the Commission’s Transport and Energy department (DG TREN) said in an interview that CO2 free energy generation had “three legs – those being renewable energy sources, carbon capture and storage (CCS) and nuclear power, the EurActive website quoted him as saying.

“This is a step in the wrong direction in the combat against climate change,” said nuclear physicist Nils Bøhmer of Bellona.

“Instead of creating more nuclear waste, the Commission should focus on energy efficiency and renewable energy sources.”

Along with his troubling remarks regarding nuclear power, Ruete did confirm the EC’s support for CCS and plans to make it commercially viable.

“We need to make sure we have a good framework in terms of state aid and public finance. It is clear that a strong push from the public side is needed in terms of financing CCS.” he told EurActiv, adding that "we need to see whether member states are actually putting their money where their mouth is."

What these statements of senior EC officials actually mean will become clearer when its “Strategic Energy Technology Plan” is presented on November 20th. The plan is expected to set out the Commission’s proposals for what energy technologies the EU should promote and how it should be done.

The overall objectives of the plan will be to, lower the current cost of renewable energy, facilitate the efficient use of energy, and place European industries in a leading position in the use of low-carbon technologies.

“Deveploping more nuclear power plants will produce more nuclear waste for the coming generation and it will increase the risks of a nuclear accident happening in Europe,” said Bøhmer.