BRUSSELS – The European Commission (EC) is spicing up its green image by extending Green Week with a second week in Parc Cinquantenaire. The European Technology Platform for Zero Emission Fossil Fuel Power Plants (ZEP) participated with a stand and organized the first ZEP Public Debate on CCS on Thursday June 14th. 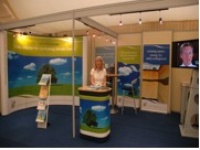 ZEP in focus
Green Week is an annual event organized by the EC. This has originally been a one-week long event in Charlemagne. This year the organizers decided to open up a large festival tent in Parc Cinquantenaire, close to the EC building. The tent houses stand for different industries, regions and NGOs that wish to promote environment awareness, and ZEP is the first stand by the entrance.

The ZEP stand is staffed by a variety of members from the technology platform. The main task of the stand is to inform people about carbon capture and storage technology (CCS) and the activities of the platform. In addition to official ZEP brochures, Bellona has provided scientific articles about technology and regulatory challenges for the deployment of CCS. Other memebers of ZEP has provided videos and other material.

CCS event
Friday, June 8th, Mogens Peter Carl, the director general of the EC for the Environment visited the Green Week Tent. His attention was soon caught by the ZEP stand, and Bellona Europa’s Paal Frisvold answered Carl’s questions. He was interested in CCS technology, and already had a thorough knowledge of the topic, as it is currently high on the EC agenda. 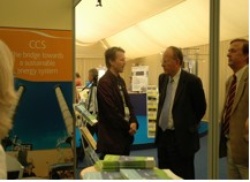 Frisvold also told Carl about the upcoming in ZEP event in the Hospitality Suite of the Green Week Tent. The event will be an opportunity for the public to learn more about CCS technology. Bellona’s Beate Kristiansen will open the seminar with a talk about the general need for CCS, while the British geologist Nicholas Riley and Bellona’s Aage Stangeland will provide their expert knowledge of the technology and in particular on storage issues. The EC’s Scott Brockett said in the end the commission envision the future legislative framework that CCS will operate under in order to ensure environmentally safe storage of carbon dioxide.

Charlemagne
The main part of Green Week will be in the Charlemagne building from June 12th to 15th. EC President Jose Manuel Barroso and Vice President Margot Wallstrom will open the official programme, and throughout the week different experts will speak about challenges faced and lessons learned from the contemporary environmental debate. These exhibitions are, however, limited to pre-registered participants, and it is therefore anticipated that more people will come to the Green Week Tent, which is open to the public the entire week.

For Bellona this is a great opportunity to organise the public relations aspect of the ZEP platform. The goal now is to fill the Green Week Tent on Thursday in order to raise public awareness about CCS.