A ticket to the Offshore Northern Seas (ONS) conference in Stavanger, Norway, costs 15,000 NOK (about $2,300), but Bellona Web was nonetheless invited to take you inside and show you that international power-brokers and decision makers have indeed begun to think about the environment.

Published on September 5, 2006 by Ola Innset, translated by Daniel Jensen 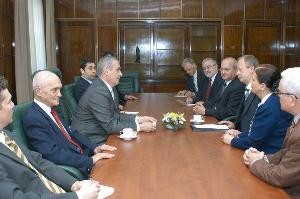 This year’s ONS conference, which is held bi-annually, was entitled “Bridging the Energy Gap” and was one of the largest oil conferences in the world, with 1292 exhibitors from 23 countries, and more than 30,000 visitors. In connection with Bellona’s 20th anniversary, the Bellona Foundation received several tickets to this year’s ONS conference. And, as the opening of of the mid-August conference revealed, emissions reduction and environmental concerns are now much higher on the agenda than they have been at earlier ONS conferences.

"It’s very nice to both see and hear that people in high positions have started realizing the enormous challenges the world is facing when it comes to reducing CO2-emissions," said the head of Bellona’s Energy Department, Beate Kristiansen.

The EU
At the conference, the EU commissioner for energy, Andris Piebalgis, talked about the EU’s goal of obtaining 12 percent of its energy from renewable sources by the year 2010. Presently, the EU gets 6 percent of its energy from renwables. Moreover, said Piebalgis, 21 percent of all electricity should be renewable by the 2010 as well, and bio-fuel should cover 5.75 percent of total EU fuel consumption. In order to meet these goals, Piebalgis said that large scale initiatives will be announced by the end of 2006.

Piebalgis also presented numbers based on calculations by Bellona’s Aage Stangeland earlier in the week the ONS conference was held. The calculations showed that it is possible to capture 240 gigatonnes of CO2 globally by the year 2050, and 30 gigatonnes in the EU by the same year. Piebalgis added that he does not share the nuclear industry’s optimism that more reliance on nuclear power will reduce harmful emissions, but he said the nuclear option should be kept open.

Great Britain
In mid-August, the British Minister of Energy Malcolm Wicks attended a meeting with Bellona staff aboard Bellona’s vessel, the S/Y Kallinika. Wicks did not, however, have time to attend his scheduled appearance at the ONS conference, where he was slated to speak.

Instead, Parliamentary Undersecretary of State of the Scotland Office David Cairns stepped in. Cairns was quick to point out that Great Britain will reduce its emissions by 60 percent by 2050. He stressed the importance of international cooperation and sharing technology and experience when facing new energy and climate challenges. He added that Great Britain would be well under way to meeting their emissions goals by the year 2020. He argued that, if the right measures are taken, UK emissions could be reduced 20 percent by the year 2020.

The former British Petroleum (BP), now Beyond Petroleum (still abbreviated as BP), was represented by Lewis Gillies, the Managing director of Hydrogen Power at BP Alternative Energy. He used BP’s own CO2-emissions project at Peterhead, Scotland as a practical example of Enhanced Oil Recovery (EOR).

The project will deliver CO2 to the Miller-field in the North Sea for this purpose. For this project, BP is using pre-combustion technology where hydrogen is produced from biogases. The biogases are then burned in turbines to generate energy.

In connection with BP’s choice of technology, Gillies had three messages he wished to underscore to the conference audience:

He also said that it is time to stop talking and start letting the power industry handle the emissions problem.

A new tune from Norsk Hydro
The Norwegian oil and energy giant, Norsk Hydro, has traditionally been among the conservative energy providers that have been sitting on the sidelines as the rest of Norway has discussed Carbon Capture and Storage (CCS). But now it seems they have altered their stand on the issue.

"It is expensive, but it is not that expensive, she said, adding that the cost for power would be acceptable.

Bech Gjørv also talked about Hydro’s offshore wind project, called Hi-wind, which works to develop technology for exploiting offshore winds. She also laid out some scenarios where windmills could be built in connection with oil rigs in order to provide power to these rigs.

"This is a new and enjoyable tune from Hydro," Bellona’s Kristiansen said.

"Especially the fact that Hydro suggests electrification of new oil rigs, which we see as a necessity, and we are happy to see that Hydro is embracing that vision. Hydro is competent when it comes to renewable energy, but we would like to see them take a more active part in specific CCS projects," she continued.

"Several plans have been presented during the conference. What remains to be seen now is what actions are taken during the fall," said Kristiansen.