Vis menyen
Bellona.org > About CCS > How CCS > Storage of CO2

Storing CO2 underground uses much of the same techniques and principals that have naturally trapped oil and gas underground for millions of years. Storage can take place both underground on land and offshore.

Following transportation the CO2 is stored in porous geological formations typically located more than 800 meters below the earth’s surface, where pressure and temperatures cause CO2 to retain a liquid or dense phase. Suitable storage sites include former gas and oil fields, deep saline formations or depleting oil and gas fields.

The availability of CO2 storage is the linchpin of CCS deployment. A lack of storage capacity could render CO2 capture futile, and in the worst case could discourage investments in CCS projects. A CO2 storage industry that can match the scale of the oil and gas sector will therefore be necessary to enable the necessary scale of CCS deployment. Bellona’s report on Scaling the CO2 Storage Industry finds that significant investments in CO2 storage must begin before 2020 if we are to develop the necessary capacity to store emissions from CCS projects operating from 2030.

Storing CO2 underground uses much of the same techniques and principals that have naturally trapped oil and gas underground for millions of years. Storage can take place both underground on land and offshore. Before selecting a storage site, however, it is necessary to make sure that once injected the CO2 will not leak out. Safe and effective storage sites are marked by the following characteristics:

Deep saline aquifers, which are to be found all over the world, represent the largest potential CO2 storage capacity in the long term. An aquifer is porous sandstone where water is present naturally in the pores in the sand. If CO2 is injected it can occupy the pores just like water does, or it can even be dissolved into the water. As times goes by the CO2 will start to dissolve in the water. This naturally occurring process lowers the risk of leakage because the water has already been trapped in the aquifer for millions of years. After several thousands of years, the CO2 will react with other minerals and form solid limestone, which is the safest form of CO2 storage. It is important to note that only aquifers containing salt water are suitable for CO2 storage. Aquifers containing fresh water will not be used for CO2 storage as such aquifers can be used for the production of drinking water. 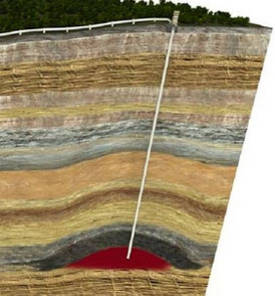 CO2 storage in a saline aquifer below a caprock Credit: Prosjektlab

An important limitation to aquifers as storage sites is the quality of the bedrock. CO2 injected into an aquifer is buoyant, meaning that it will try to move upwards. This necessitates a lid or cover on top of the aquifer to stop the CO2 from moving upwards. Such a lid can be a thick layer of impermeable mud or clay. Therefore, before CO2 storage can take place it is necessary to conduct geological surveys to ensure the impermeability to CO2 of the caprock. However, the strata above the storage formation and caprock also need to be assessed because if CO2 leaks it would migrate through these. It is important to note that CCS shares many legal, planning, technical and operational similarities with underground gas storage (UGS), a process which has been carried out worldwide for almost 100. While underground natural gas storage is safe and effective, some projects have leaked, mostly caused by poorly completed, or improperly plugged and abandoned wells and by leaky faults.

The best evidence that CO2 can be stored safely are the natural accumulations of relatively pure CO2 that are found all over the world in a range of geological settings. CO2 has been trapped in such natural reservoirs for millions of years, which is a clear indication that injected CO2 can be stored for millions of years. For instance, 200 million tonnes of CO2 trapped in the Pisgah Anticline in the USA is thought to have been generated more than 65 million years ago. With no evidence of leakage, this site proves long-term trapping of CO2. Conversely, natural sites like volcanic systems and spas are leaky and useful for studying the health, safety and environmental effects of CO2 leakage. 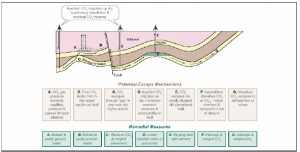 Experience from CO2 storage projects in operation also offer important experience and evidence of safety. The offshore gas field Sleipner, in the middle of the North Sea, produces natural gas that contains up to 9 % CO2. Export quality of natural gas requires less than 2.5 % CO2, and the CO2 is therefore separated from the natural gas. The CO2 is injected into a sand layer containing salt water, called the Utsira formation, which lies 1000 meter below the sea bed. About 1 million tonnes of CO2 has been injected annually since 1996, and there have not been any indications of leakages. 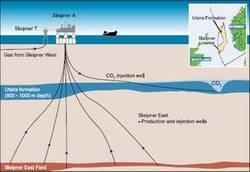 The risks due to storage of CO2 in geological reservoirs fall into two broad categories: global risks and local risks. Global risks involve the release of stored CO2 to the atmosphere that may contribute significantly to climate change if some fraction leaks from the storage formation. If CO2 leaks out of the storage formation, local risks include hazards for humans, ecosystems and groundwater. However, observations and analysis of current CO2 storage sites, natural systems, engineering systems and models indicate that the likelihood or probability of leakage in appropriately selected and managed reservoirs is nearly absent or negligible over long periods of time.

There is already considerable experience with injecting CO2 deep underground for storage at a number of CCS projects. These storage sites have been carefully selected and monitoring evidence concludes that the CO2 has been completely and safely locked into the geological formations. Careful storage system design and site selection, together with methods for early detection of leakage (preferably long before CO2 reaches the land surface), are effective ways of reducing hazards associated with diffuse leakage.

The most effective storage sites are those where CO2 is immobile because it is trapped permanently under a thick, low-permeability seal. Sedimentary basins have such closed, physically bound traps or structures, which are occupied mainly by saline water, oil and gas. Structural traps include those formed by folded or fractured rocks, and the traps are formed by changes in rock type caused by variation in the setting where the rocks were deposited. When CO2 is injected, care must be taken not to exceed the allowable pressure to avoid fracturing the caprock or reactivating faults. 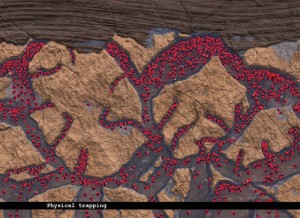 CO2 is injected into pores in the sand in the aquifer and will try to move upwards, but it is stopped by the impermeable caprock on top of the aquifer Credit: Prosjektlab

When CO2 is injected into a formation, it displaces saline formation fluid and then migrates buoyantly upwards, because it is less dense than the water. When it reaches the top of the formation, it continues to migrate as a separate phase until it is trapped as residual CO2 saturation or in the local structural trap within the sealing formation. Trapping can also occur in saline formations that do not have a closed trap, but where fluids migrate very slowly over long distances.

When the dense CO2 is injected into the formation, it displaces fluid as it moves through the porous sponge like rock. As the CO2  continues to migrate, fluid replaces it, trapping the CO2  as residual droplets in the pore spaces, rendering it immobile. This is often how the oil was held for millions of years.

In the longer term, significant quantities of CO2 dissolve in the formation water and then migrate with the groundwater. Where the distance from the deep injection site to the end of the overlying impermeable formation is hundreds of kilometers, the time scale for fluid to reach the surface from the deep basin can be millions of years. The primary benefit of solubil­ity trapping is that once CO2 is dissolved, it no longer exists as a separate entity, thereby eliminating the buoyant forces that drive it upwards. 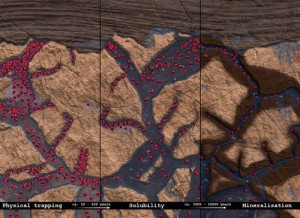 CO2 initially trapped by the caprock (left), but as times goes by CO2 dissolves into water (middle) and finally, after thousands of years, CO2 reacts with other minerals to form limestone which is the safest way to store the CO2 (right) Credit: Prosjektlab

CO2 in the subsurface can undergo a sequence of geochemi­cal interactions with the rock and formation water that will further increase storage capacity and effectiveness, a mecha­nism known as geochemical trapping or mineralisation. CO2 dissolved in water will form ionic species that can react with the rock and form stable carbonate minerals. This is also re­ferred to as mineral trapping, which is the most permanent form of geological storage. Mineral trapping is comparatively slow, potentially taking thousands of years or longer. Nevertheless, the permanence of mineral storage, combined with the poten­tially large storage capacity present in some geological settings, makes this a desirable feature of long term storage.

The storage site and its surroundings need to be characterized in terms of geology, hydrogeology, geochemistry and geomechanics. Documentation of the characteristics of any particular storage site will rely on data that have been obtained directly from the reservoir. Integration of all of the different types of data is needed to develop a reliable model that can be used to assess whether a site is suitable for CO2 storage. Selection of storage sites will be based on characterization data. The most important data sets required for site selection are listed below:

Predictions and testing of the injectivity (rate at which the CO2 can be injected into the storage site) and storage capacity of the site are vital to an initial assessment of economic feasibility.

Computer simulation has a key role in the design and operation of field projects for underground injection of CO2. In a similar vein, simulation can be used in tandem with economic assessments to optimize the location, number, design and depth of injection wells. Simulation models can also be used to assess the impact of possible operational changes, such as drilling new wells or altering injection rates, often with the goal of further improving recovery (in the context of EOR) or of avoiding migration of CO2 past a likely spill-point.