Vis menyen
Bellona.org > About CCS > How CCS > Capture of CO2

There are currently three main technologies used to capture CO2, namely post-combustion, pre-combustion and oxyfuel. All of these technologies can capture at least 90% of the CO2 emitted; current elevated costs are the only constraint to capturing 100% of CO2 emissions using CCS.

The selection of a capture technology will be dependent on a variety of criteria including the state of development of the technology, the ap­plication, if the facility is new or existing and would therefore require retrofitting, as well as the capital and operating costs.

Capturing CO2 from the flue gas of a power plant is referred to as post-combustion CO2 capture because CO2 is removed after (i.e. post) the combustion in the power plant. 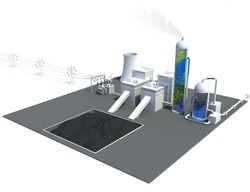 The process is straightforward: The flue gas from a power plant, or an industrial plant, enters a scrubbing tank. A liquid solvent (read more about this in below sections) is also added to this tank, and this solvent reacts with CO2, but not with the other components of the flue gas, like nitrogen. The nitrogen gas flows through the tank and leaves at the top of the tank. The liquid solvent, which has reacted with the CO2, leaves at the bottom of the tank.

Typical solvents are chemical compounds like amines or ammonia dissolved in water. These solvents cannot be transported or stored together with the CO2 because they are hazardous and expensive. The solvents are therefore regenerated so that they can be reused. Bellona has developed recommendations for how amines can be used with minimal environmental risk – Amines Used in CO2 Capture – Health and Environmental Impacts. 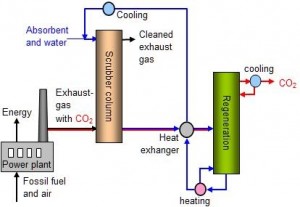 The two main challenges for post-combustion capture technologies include the large volumes of gas that must be handled, thus requiring large-scale equipment and resulting in high capital costs, and the amount of additional energy needed to operate the process.

Post-combustion technologies enable approximately 90% of the CO2 to be captured. As a result of its retrofitting option and applicability to both the power generation plants and the majority of industry plants, post-combustion CO2 storage technologies are the most widely used.

In pre-combustion CO2 capture, the CO2 is removed from the fuel prior to combustion. The process is carried out in a traditional steam reformer where the fuel is converted to hydrogen (H2) and carbon monoxide (CO). The CO-gas and steam is then converted into H2 and CO2. Finally, the H2 and CO2 gas is separated in the same way as in post-combustion CO2 capture. However, in pre-combustion capture a smaller installation than that required in post-combustion capture is sufficient due to the smaller volumes of gas. The separated H2 gas can be used as fuel for both power and industry plants or vehicles. 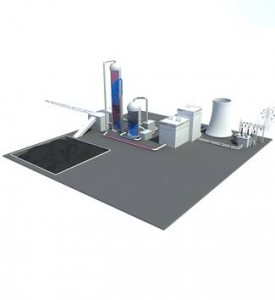 Pre-combustion capture is used in industrial processes and is becoming commercialised for power through a number of projects in the USA. The fuel conversion procedure required for pre-combustion is more complex than that involved in post-combustion, thus making the technology more difficult to apply to existing plants and best built simultaneously with a facility. Pre-combustion capture increases the CO2 concentration of the flue stream, requiring smaller equipment and different solvents with lower regeneration energy requirements. 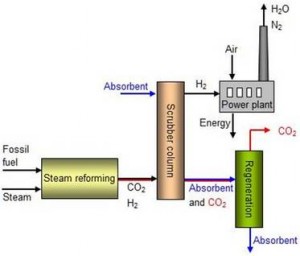 A traditional fossil fuel power plant is operated by combusting fuel and air. The distinguishing characteristic of oxyfuel combustion with CO2 capture is that combustion is carried out with oxygen instead of air. The concentration of CO2 in flue gas can be increased by using pure or enriched oxygen instead of air for combustion, either in a boiler or gas turbine. This method deploys an air separation unit that removes nitrogen from the air, producing oxygen. This is injected – alongside the fuel – into a boiler where combustion takes place. Steam is generated and used to power turbines and make electricity. 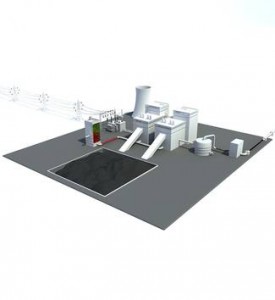 Meanwhile, the flue gas, CO2 and water vapour is re-circulated to control boiler temperature and gradually cooled. This leaves the captured CO2 to be compressed and dehydrated, ready for transport and storage. The advantage of oxyfuel combustion is that, because the flue gas contains a high concentration of CO2, the CO2 separation stage is simplified. This technology therefore makes it possible to capture 100% of the CO2. The high costs of producing pure oxygen, however, act somewhat as a barrier to the wider adoption of oxyfuel CO2 capture technologies. 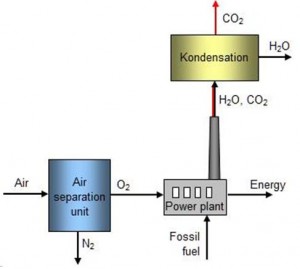 The idea of CO2 capture is to produce a stream of pure CO2 gas from a mixture of CO2 and other gas components. There are many ways to perform the operation of separating the CO2:

Absorption is a common process for post-combustion CO2 capture in which the challenge is to separate CO2 and nitrogen.

A substantial amount of energy is needed to heat up the mixture of solvent and CO2 and this energy requirement is the reason for the high cost of CO2 capture. Worldwide research is currently taking place in order to find new solvents that require less energy.

Absorption is today the most mature method for CO2 capture. The most typical solvents used in CO2 capture are amines or ammonia, well-known chemicals that react with CO2, but rarely with other gases. However, the emissions released by amines and ammonia are pollutive to the environment, which is therefore an incentive for the development of new solvents.

Adsorption is very similar to absorption. The only difference is that the CO2 will bind to the surface of the solvent in adsorption, while there is a chemical binding between CO2 molecules and solvent molecules in absorbtion.

CO2 capture by membranes is performed using a membrane that can be penetrated by CO2, but not by other gas molecules. 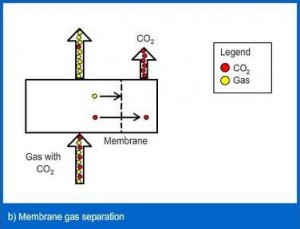 Gas separation by membranes is well known but today the process is costly compared to absorption. Further research and development of membranes will probably improve their performance and reduce the cost. Membranes are likely to be an important option.

Distillation is a common process used to separate liquids. When a mixture comprised of two liquid components is heated, the component with the lowest boiling point will boil first. The mixture is thus separated into two components: a gas stream and a liquid. 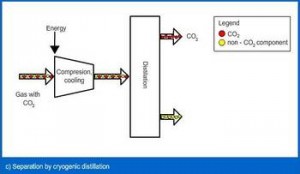 CO2 can be separated from other gas components by first cooling the mixture until it becomes a liquid. Very low temperatures are required for this and due to the low temperature the following distillation to separate the CO2 is called ‘cryogenic distillation’.

However, there are some significant barriers to mineralisation. The process produces a by-product of solid material, in the form of rock – often in very large quantities. A solution to this cumbersome problem will need to be found if mineralisation is to be realistically used in the reduction of CO2 emissions. Mineralisation is therefore unlikely to be one of the main technologies used in combatting global warming as long as this problem remains unresolved. It will rather be used as an alternative technology when there are large deposits of minerals that are suitable for the mineralisation process.

The material that is produced through the process of mineralisation has potential commercial value. Therefore this process has been put forward by industrial stakeholders. However, if CO2 is captured in a mineralisation process and the product is then sold as an industrial product, what will happen in the future when the product is degraded or deposited as waste? Will mineralisation still be considered a strategy in reducing CO2 emissions? If this is the case, then CO2 could be released back into the atmosphere, leaving us without a process for reducing CO2 emissions.

If CO2 capture by mineralisation is to be regarded as an emission-reducing strategy, the safe and permanent deposit of the mineralisation product must be fully documented.

In a thermal CO2 capture process a gas mixture of CO2 and another component is cooled to ensure that one component becomes liquid.

Separating CO2 and steam is cheap and easy and by cooling a CO2 and steam mixture, the steam will eventually condense to liquid water, leaving pure CO2 gas. This is exactly what happens in oxyfuel combustion and in ‘chemical looping’.