A carbon negative value chain withdraws more CO2 from the atmosphere than it emits.

Emissions resulting from combustion of sustainably produced and processed biomass are recognised as being neutralised – i.e. virtually zero – over time, as new biomass is grown to replace it and take up the same amount of CO2. If the CO2 emitted in such processes is captured and stored using CCS, carbon-negative value chains are attained which withdraw more CO2 from the atmosphere than they emit. This is Bio-CCS (also known as BECCS). 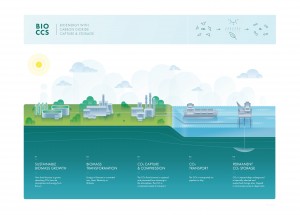 The use of biomass in a plant fitted with CCS produces a double climate benefit: Emissions from combustion of fossil fuels are prevented from entering the atmosphere and the CO2 contained in the biomass is captured, thereby removing CO2 from the atmosphere. The introduction of sustainable biomass to CCS-equipped fossil power plants and industries, or the use of CCS at biofuel production facilities, will therefore begin to reduce the level of CO2 in the atmosphere, thereby reversing climate change.

Bio-CCS is in many ways a low-hanging CCS fruit. The cost of CO2 capture from biofuel production, such as ethanol fermentation, is generally very low, as the CO2 by-product streams are often of high purity. The pure stream of CO2 negates the need for additional separation equipment, with only driers and compression units necessary to prepare the CO2 for transport to a storage site.

The Intergovernmental Panel on Climate Change (IPCC) is clear that Bio-CCS is needed alongside CCS to stay within the 2°C target, importantly because it allows for some more flexibility in decarbonising:

“Delayed mitigation further increases the dependence on the full availability of mitigation options, especially on CDR technologies such as BECCS” (IPCC, 2014).

Bellona led the work of the Joint Task Force Bio-CCS of the Commission’s Technology Platforms for CCS and biofuels, ZEP and EBTP respectively, to develop a report on the Bio-CCS potential of Europe – Biomass with CO2 Capture and Storage (Bio-CCS), the way forward for Europe. Furthermore, Bellona’s CCS Roadmap for Romania – Our future is carbon negative: A CCS roadmap for Romania – addresses the country’s carbon negative potential.

Bellona is also involved in developing the sustainable biomass component of Bio-CCS, especially focussing on advanced sources that do not compete with land and food, such as the holistic and integrated solutions of Ocean Forest and Sahara Forest Project.